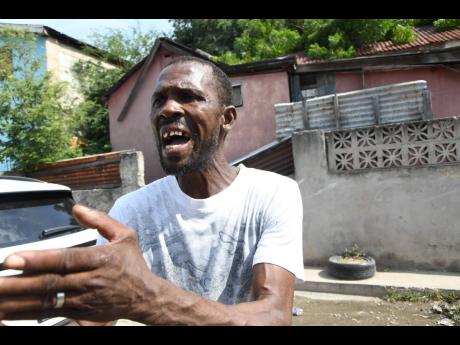 Rudolph Brown/Photographer
Roger Simpson speaks to journalists about the killing of his son, Shavon Simpson, at an illegal bike show on Monday.

Nineteen days after the gun murder of his son, a distraught father claims investigators have not acted on useful information and he agrees with Prime Minister Andrew Holness’ hyperbolic advocacy for the death penalty for persons convicted of...

Nineteen days after the gun murder of his son, a distraught father claims investigators have not acted on useful information and he agrees with Prime Minister Andrew Holness’ hyperbolic advocacy for the death penalty for persons convicted of illegal possession of firearm.

“Yuh just want a gun fi see anybody and go kill somebody. I agree with that law immediately. I would be somebody weh sign to that immediately!” Roger Simpson told The Gleaner on Monday.

Simpson, a 50-year-old construction worker, said that his spirits have been crushed since the loss of his son on November 13. He is still seeking closure.

Reports are that, about 7:50 p.m., residents at an illegal bike show heard gunshots and summoned the police.

Shavon was seen on the ground suffering from gunshot wounds, with a motorcycle on top of him.

He was taken to the hospital where he was pronounced dead.

His father acknowledged that Shavon was attending an illegal event. (Jamaica’s Disaster Risk Management Act outlaws the hosting of in-person entertainment events because of the coronavirus pandemic).

The elder Simpson wants his son’s killer brought to justice.

“He wasn’t supposed to be there, but no matter what the circumstances why he was there, get the investigation, find out why it happen. The ballistics too full up? Find some way out ... . We a lose too much of our kids dem far too long,” Simpson said.

Sentiments like those are likely to have influenced Holness’ rhetoric at the Jamaica Labour Party’s 78th annual conference at the National Indoor Sports Centre in Kingston on Sunday. Holness said, were it up to him, the illegan gun possession would merit the death penalty.

With more than 1,300 people killed this year, Holness promised a vigorous legislative push to tackle the country’s galloping murder rate.

The investigative process has been slow, said Simpson, who has reportedly turned up to give information when required. But that impatience is not dissimilar to the experience of hundreds of families who lose relatives annually.

“My son is not a criminal,” said the father of eight, who warned that he did not want to do his own investigation that might end in vigilante justice.

“Mi need the justice system fi work in such a way that it quick and brisk. Because that’s why people haffi react, you know, because when yuh find out say yuh put it in the hand of the law and it nah work out, you haffi have a different way out,” he said.

Attempts to reach the investigating officer have been unsuccessful.

The Duhaney Park police have possession of his son’s motorcycle, which they have asked him to retrieve. However, Simpson is adamant they can do more to help him and his family get through this turbulent time.

He said he has had to be a tower of strength counselling his partner and Shavon’s siblings.

Simpson had dreams of his son becoming a college graduate and leading a successful life. Now he is fine-tuning plans for his funeral.