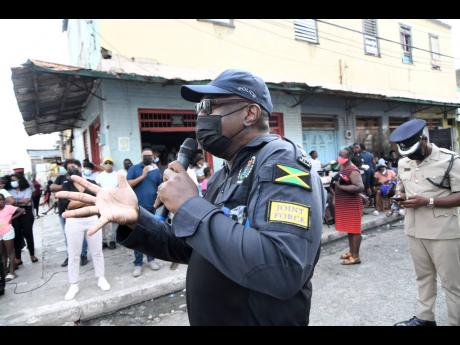 Rudolph Brown
Senior Superintendent of Police Steve McGregor (left) and Superintendent Beresford Williams (right) in charge of Kingston Central Police Division meeting with the residents of Tel Aviv in Southside Central Kingston on the violence in the community on Friday. 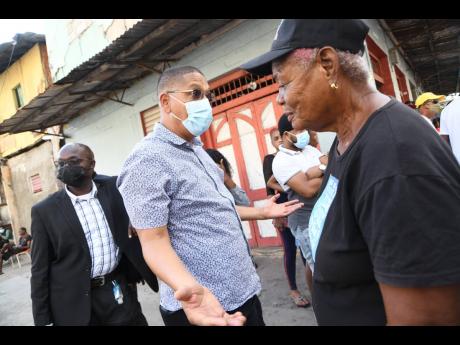 Rudolph Brown
Donovan Williams, (centre) member of parliament for Kingston Central speaks with a resident at a meeting organised by the police and stakeholders with residents of Tel Aviv in Southside Central Kingston on Friday.
1
2

New head of the Kingston Central Police Division, Superintendent Beresford Williams, told residents and stakeholders during a street meeting yesterday inside the Zone of Special Operations (ZOSO) that the divisional murders should be held under 20...

New head of the Kingston Central Police Division, Superintendent Beresford Williams, told residents and stakeholders during a street meeting yesterday inside the Zone of Special Operations (ZOSO) that the divisional murders should be held under 20.

Charging that 20 murders were too many, Williams said it was far better than the 79 recorded in the division last year as the police aim to reduce the fear of crime.

“Ultimately, we aim to preserve life…We don’t even want 40 murders in this division… we want to record no more than 20 murders for this year and 20 too much because every life matters,” the senior cop said.

Some residents shouted, “We don’t want none at all!”

The meeting was held in a section of the community called Tel Aviv located at the corner of Laws and Hanover streets.

Williams told the residents that with their support, the objective could be achieved.

Up to January 8, four murders were recorded in the division this year.

The ZOSO, a special security measure, was declared on Sunday January 9 in the Parade Gardens section of Central Kingston.

The police say since the establishment of the ZOSO, they have been having issues with feuding females in the space, especially along Rum Lane.

“Stabbing, bottle throwing, stone throwing, acid throwing, is only the help of God why we have not had more serious injuries. We are going to start locking down at 8 p.m.,” Williams said.

He told the residents that if the violence continued, they would not be allowed outside day or night.

The street meeting was not without contention as tempers flared and had to be assuaged when stakeholders from the political divide addressed the gathering.

Member of Parliament for Kingston Central Donovan Williams said the ZOSO and the intervention in the community would pave the way for a better day for the people and more investors would come in.

“I want to thank the police for what you are doing. Continue to do it, preserve the peace so that people can come here and spend their money, paint up dem shop, open up new stores, buy out new buildings and build it up and create employment, ” Williams shouted amid heckling from some residents.

Imani Duncan-Price, the People’s National Party caretaker for the constituency, urged residents to rid themselves of the guns and put an end to the killings.

“Tel Aviv family, I ask you to give the community a chance to grow again. Work with the police. For any man who was in the bad things, put down the gun, just put it down,” she said.

Senior Superintendent of Police Steve McGregor, who is the area commander, said there would be more meetings throughout the division over the course of the ZOSO.

He also sought audience with several men in the community in order to clamp down on the violence affecting residents.

Other stakeholders like Crime Stop, Restorative Justice, Kingston and St Andrew Lay Magistrates and the Victim Services Division were on hand.