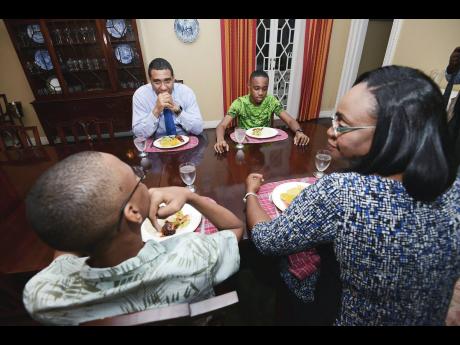 File
File In this 2018 Gleaner file photo, Prime Minister Andrew Holness and his wife, Juliet, enjoy some family time with sons Adam and Matthew at Vale Royal, the official residence of the prime minister.

Up to the date of the last general election, Prime Minister Andrew Holness and his family had assets worth approximately J$192 million with those held in US dollar continuing along an increasing trend, based on the finally published statutory...

Up to the date of the last general election, Prime Minister Andrew Holness and his family had assets worth approximately J$192 million with those held in US dollar continuing along an increasing trend, based on the finally published statutory declaration of the head of Government.

The statement was published in the Jamaica Gazette, the State’s newspaper, as required by law, on January 10, ending a long wait for the document, which covers the period January 1, 2020 to September 3, 2020, when the polls were held.

The total asset figure is a Sunday Gleaner calculation of the combined assets declared in US and Jamaican currencies.

According to the latest records, Holness, his Member of Parliament-wife Juliet, and their two sons, Adam and Matthew, had approximately J$172 million worth of assets denominated in Jamaican currency, which is just over J$14 million than he reported in 2019.

The increase appeared to have come from a jump in monies in a local savings account to J$11.8 million, about J$7.5 million more than the last declared amount. Some J$4.7 million is being held in a current account, a banking account typically used to conduct business transactions.

Securities, which are tradable financial instruments such as stocks, increased to J$16.4 million from the $11.8 million reported in 2019.

A significant chunk of the Holness assets remains in business investments that totalled J$129.7 million, just below the J$130.9 from the last report.

There was no change in the values of the family’s main real estate, which was bought for J$7 million and has maintained a market value of J$20 million, based on an estimate provided by Holness. It was the same market value in 2019.

The cash value on life insurance was stated as J$2.8 million. There was nothing for 2019.

Income for the Holness family totalled J$19.4 million, just over a million more than reported in the last declaration.

There was not much change in the family’s debt. For 2020, that amounted to approximately $16 million and was made up of $1.2 million in real estate mortgage, and J$14.8 million listed as “other accounts payable”.

The Holness family appears to be doing well with its investments denominated in the US dollar as liabilities have fallen, income grown and asset values increased in 2020, over the figures declared for 2019.

There were no US real estate or life insurance.

In February 2016, just before parliamentary election, Holness, the member of parliament for St Andrew West Central, released data showing he had assets which totalled $99 million and US$415,000.

That was mainly made up of his then newly constructed house, including the US$300,000 cost of the Beverly Hills property.

Holness’ wife, Juliet, is a developer, member of parliament for St Andrew East Rural and deputy speaker of the House of Representatives. She’s a director and majority shareholder in JAJ Development and Holdings Ltd.

The family has a company, ADMAT Incorporated, that is registered in St Lucia, a low-tax jurisdiction that offers significant confidentiality to company owners.

The prime minister has said the company was set up as a trust company for his children, after whom it is named. Holness holds a 50 per cent stake, with Adam and Matthew Holness each holding 25 per cent.

In 2011, the title for the Beverly Hills property was transferred from a St Andrew businesswoman to ADMAT.