‘No longer a nation child’ 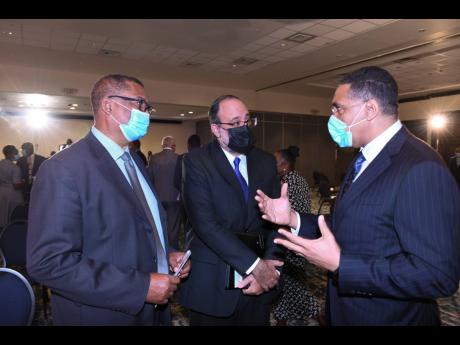 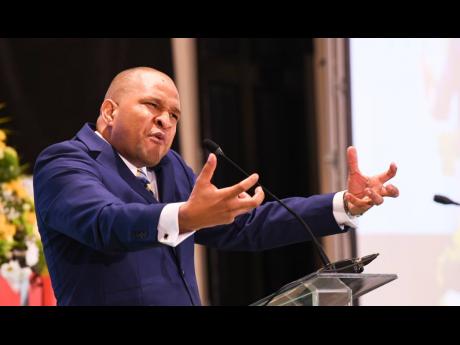 Ricardo Makyn/Chief Photo Editor
Delivering the main address, the Reverend Dr Rohan Ambersley, pastor of the Sterling Castle New Testament Church of God in St Andrew, called on Jamaicans to push back against a philosophy of evil promoted and accepted as cultural norms.
1
2

The nation’s leaders are being urged to put aside “juvenile” partisan politics in order to move the country forward as it looks to celebrate 60 years of Independence this August.

Amid a spiralling crime problem and challenges from the COVID-19 pandemic that have impacted nearly all sectors of the society, political leaders gathered yesterday at the 42nd annual staging of the National Leadership Prayer Breakfast.

Delivering a searing sermon on the theme ‘Pressing Forward with Faith, Hope, and Love,” Reverend Dr Rohan Ambersley of the Sterling Castle New Testament Church of God said that the imminent Independence celebrations signal the need for mature politics and restored civility among citizens.

“While we’re still a relatively young nation, we are no longer a nation child. We must grow beyond our juvenile tendencies that emphasise self over community,” he said. “We must show our maturity as a nation in the way we think and behave, and we must rise up, in this 60th year, to become the great nation we are destined to be.”

During the service, Prime Minister Andrew Holness and Opposition Leader Mark Golding, both of whom delivered scripture readings, joined hands in what has become an annual symbol of unity between the island’s two main political parties in addressing the nation’s problems.

But the Government has been at loggerheads with the Opposition in recent times over the latter’s failure to back extensions to states of emergency (SOE) last November.

The Golding-led People’s National Party has stuck to its position that the SOEs, with the provision for controversial detentions, are not needed to arrest the country’s crime problem, a conclusion that the Government has vigorously rejected, arguing that the measure has helped to reduce the levels of crime in areas in which it had been implemented.

In response to a spate of escalating gang violence on opposite ends of the island, the Government this year has implemented two new zones of special operations – in the Kingston Central community of Parade Gardens and in sections of Savanna-la-Mar, Westmoreland.

In his sermon, Ambersley argued that the level of violence in the country was as a result of a social deficit and a culture of embracing wrong over right.

“Right and wrong is not a relic of the past,” he charged. “Right and wrong is still relevant now, and it is relevant for all people. I suggest that if we embrace what is right, our economy will do better, our social life will improve, and it will benefit the people totally.

“Doing right must be embraced by the members of the Cabinet as much as it should be embraced by skilled carpenters who make cabinets,” the clergyman charged, adding that too many citizens “see doing right as insignificant”.

He added: “I suggest that the underperformance of a nation economically cannot be separated from the social and spiritual deficiencies of our people. I suggest that the crime, the insufficient productivity, the poor educational outcomes are all related to one degree or the other to the diminished willingness of too many to do what is right.”

Speaking to what he described as “crippling cynicism and stifling scepticism” spreading in the society, Ambersley called on the nation to push back against a “philosophy of evil” promoted and accepted as cultural norms.

Pointing to the eight years left in the Government’s Vision 2030 policy framework, Ambersley called for a “sustained and coordinated” national effort towards achieving those developmental goals, outlining what he deemed ‘Loving Interventions for Transformation’ – LIFT.

This, Ambersley said, would see national development partners coming together and agreeing on specific actions to take to move the country closer to those goals.

“I recommend a sustained and coordinated national development effort, inspired by a passion for right action, and an embracing of right attitude. This would support vision 2030, with its lofty and commendable goals,” he said.