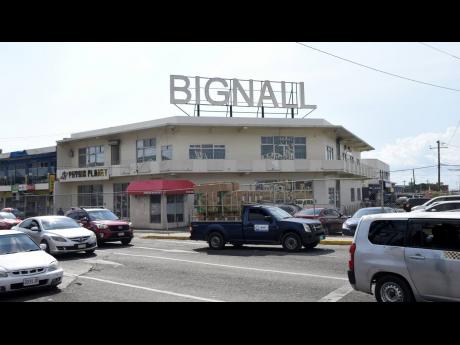 Attorney-at-law Vaughn Bignall, who had been embroiled in a legal battle with the General Legal Council (GLC) for advertising his law firm's services in the media and on social media, yesterday scored a major victory following a landmark ruling by the Full Court that some of the council's rules barring lawyers and law firms from advertising were unconstitutional and should be struck down.

The operator of the law firm Bignall Law, which reportedly had been advertising since 2017 in the media and on social media contrary to the GLC's advertising rules, had brought a claim against the GLC arguing that some of the council's advertising rules breached his constitutional rights.

Under the Legal Profession Act of 1972 and the Canons of Professional Act of 1978, lawyers were banned from advertising their services, but an amendment to the Canon in 2016 allows them to advertise within certain limits.

The contentious issue between the two parties arose after the GLC in September 2018 cited the law firm for breaching the Canons following the publication of a number of advertisements including the airing of an ad on TVJ during the Grammy Awards in January 2018, which was dubbed as “particularly egregious”.

This resulted in a number of orders being made against the firm by the GLC in September 2018, which included the discontinuation of any further advertisement and for the firm to seek approval from the council before doing any further promotion.

The matter, however, intensified in February 2019 after the firm reportedly continued advertising in breach of the Canons resulting in the advertising committee chairman penning a letter to Bignall regarding a video posted on Instagram and Facebook in December 2018 and the firm being later summoned before the GLC's Disciplinary Committee.

But the Full Court in a draft copy of its judgment released yesterday declared that the impugned sections of the Canon are not a demonstrably justified limitation on the right to freedom of expression guaranteed by section 13 (3) (a) of the Charter of Fundamental Rights and Freedoms and therefore unconstitutional, null and void and of no legal effect.

The court similarly declared that challenged aspects of the Canons are not demonstrably justified limitations on the right to distribute or disseminate information through any media guaranteed by section 13 (30 (d) of the charter and are unconstitutional, null and void and of no legal effect.

Right to a fair hearing

The court, however, refused the claimant's request for a declaration that sections of the Canons breached the right guaranteed to him under section (13) (3) of the charter.

Bignall, in the lawsuit, had also sought a declaration that the council had breached his right to a fair hearing within a reasonable time by an independent and impartial court or authority established by law guaranteed by the charter.

He also wanted an order quashing the September 26, 2018, GLC decision “as being null and void and of no legal effect, as well as an injunction restraining the GLC from commencing or continuing any disciplinary proceedings against him.

But the Full Court refused the injunction order while declaring the GLC hearing, which had resulted in the September 2018 order, unconstitutional, null and void and of no legal effect. It further added that the hearing that had led to those orders was outside of the authority provided to the council by the Legal Profession Act.

The judges said it found merit in the argument presented by the claimant that he did not receive a fair hearing regarding allegations that his advertisements violated the Canons, as the hearing was before the council which was not an authority established by law for that purpose. The Disciplinary Committee would have been the proper forum, the judges indicated.

Attorney-at-law Michael Hylton, one of the lawyers representing the GLC, when contacted said the GLC will review the judgment to determine whether there will be an appeal.

However, he said it must be noted that “What the court struck down was the way in which the rules in relation to advertisement were being enforced. The court ruling meant that the rules must be enforced by disciplinary proceedings by the Disciplinary Committee and not by the GLC.”

Attorney-at-law Georgia Gibson-Henlin, who represented Bignall, said that yesterday's ruling has created an opportunity to review the issues and involve all stakeholders with a view to protecting the dignity of the profession.