‘A burden has been lifted off my shoulder’ 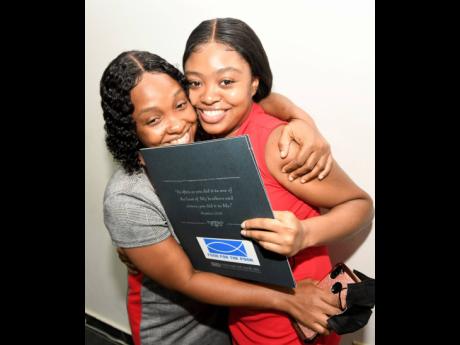 Rudolph Brown
First-year medical student, Keonie White, (right) gets a hug from her sister Nicola White after she received her medical scholarship from Professor Dale Webber, Pro Vice-Chancellor and Principal of UWI Mona Campus and Craig Moss-Solomon, executive director of Food for the Poor Jamaica. The Food For The Poor medical scholarship was awarded to the UWI student at the Faculty of Medical Science, UWI, Mona, Kingston on Friday, January 28, 2022.

When Keonie White was just a few days old, she contracted pneumonia after her release from hospital.

It was difficult to get transportation from the rural community of Auchtembeddie in Manchester, at that hour of the night, so her parents and siblings stayed up and watched over her as they were fearful that she would not survive until the morning.

When she was taken to hospital the following morning, the now 22-year-old said doctors worked relentlessly to save her life.

Having heard the story numerous times, she developed an appreciation for medicine at a tender age and this propelled her to pursue a Bachelor of Medicine, Bachelor of Surgery (MBBS) at The University of the West Indies (UWI), Mona.

Her journey has been “fraught with financial barriers” but yesterday, the aspiring paediatrician was awarded a scholarship from Operation Starfish Nativity Catholic Church based in Virginia, in collaboration with Food For The Poor (FFP).

White attended Westwood High School before moving on to Manchester High School for sixth form. She then commenced studies at The UWI in September 2019, with partial financing from a grant. But a year and a semester into the programme, her studies came to a halt due to a lack of funds.

“I felt as if my lifelong dream and life itself was shattered, broken into pieces which I could not figure out how to put back together. When I learnt that there was a funding opportunity through Food For The Poor, it was a beacon of hope in what I describe as a period of despair and uncertainty,” she said, adding that she had spent days praying and crying.

“No longer have to worry”

With teary eyes, she expressed gratitude to the donors for granting her the scholarship that will finance her tuition until she completes the medical programme.

“A burden has been lifted off my shoulders. I no longer have to worry about the funds for the tuition, because it is something that has always been a challenge. Now, I will be better able to focus on my studies. It is really a relieving period for me,” she said.

Her sister, Nicola White, who is 18 years her senior, told The Gleaner that Keonie has always wanted to be a doctor.

“I remember that night vividly. She was very sick and even her skin colour changed. She was very pale, almost as if no blood was in her body and she could hardly breathe,” the elder White recalled.

She is grateful that Keonie received the scholarship, as it will allow her to make her lifelong dream a reality and impact lives in the way hers was saved over two decades ago.

Donor, Jim McDaniel, said the medical scholarship was created in 2017 and has been fulfilling thus far.

“This programme gives us the opportunity to help UWI produce one more physician at a time. My heart is absolutely full when I hear the testimonies of previous recipients and we will continue to look for ways to help Jamaicans,” McDaniel said.

“We are proud to come alongside you on your medical journey. Food For The Poor believes in education and we are in full agreement with Sustainable Development Goal 4, which speaks specifically to ensuring inclusive, equitable and quality education,” he said.

Moss-Solomon said FFP will continue to play its part in helping Jamaicans break generational cycles and equipping students with needed resources to fulfil their dreams and ultimately contribute to national development.

White said as the scholarship recipient, she is inspired to give back and has committed to making the donors and her family proud.