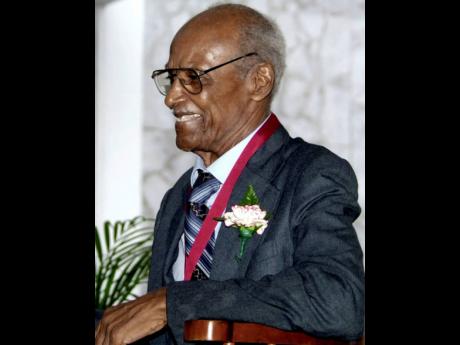 Carey Fitz William Robinson, the journalist, author and historian known as the voice of the television programme, ‘Hill an’ Gully Ride’, has died.

Robinson passed away in his sleep at his St Andrew home yesterday at the age of 97.

He had been ailing for some time.

Robinson has had an impactful, decades-long career in media as a journalist and manager but was most famous for his work as the producer and narrator of the community programme, ‘Hill an’ Gully Ride’.

It delved into Jamaican history fused with exciting stories of people, their lives and work and how they interacted in their communities in every nook and cranny of Jamaica.

A Calabar High School alumnus, Robinson grew up in British Jamaica and later attended Howard University where his intention was to study medicine.

But the lanky lad instead pursued history and psychology and, on returning to Jamaica, embarked on a quest that would help him to make a contribution to nation-building.

That was how he landed a job at The Gleaner before he became a broadcaster at Radio Jamaica and later, an employee of the Government’s Public Relations Office, now the Jamaica Information Service.

Robinson was head of the Public Relations Office from around 1962 to 1971 when he was made general manager of the Jamaica Broadcasting Corporation, a post he held until 1987.

Robinson has done extensive research on the Maroons and penned their history in the book, The Fighting Maroons of Jamaica.

He is also the author of The Iron Thorn and Memoirs of a Media Man.

Robinson had been conferred with the Order of Distinction (Commander Class) and the Silver Musgrave Medal.

He has also been awarded by the Press Association of Jamaica.

His wife predeceased him more than a decade ago and they were the parents of one daughter, Katherine.

Minister of Culture, Gender, Entertainment and Sport, Olivia Grange, has described Robinson as a man who was “dedicated to the very end”.

“Dedicated to the very end, he only stopped producing ‘Hill an’ Gully Ride’ at the advent of the COVID pandemic.

Even though he lost his sight, he was still scripting and narrating the programme which shines a light on the folk in villages across Jamaica. It was a marvel to watch him – a man who lost his sight – produce a television programme,” Grange said in paying tribute to Robinson.

She also recalled Robinson’s role in establishing the television section of the Jamaica Information Service and his service as general manager of the former Jamaica Broadcasting Corporation.

“In his long life, Carey Robinson captured and presented the story of Jamaica from our perspective. His effort to preserve, through film and television, the heritage of our people was immense; and he leaves an important body of work.”