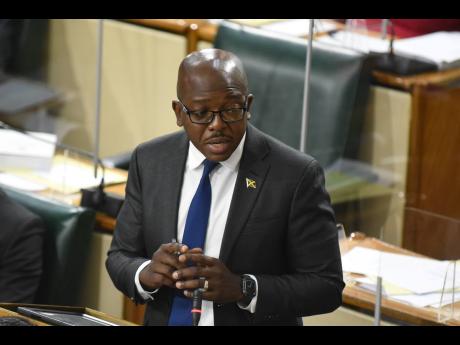 Local importers are calling on the agriculture ministry to increase transparency in the importation of chicken back and chicken neck.

CJ’s Export, Import and Manufacturing Company Limited, a Westmoreland-based family business, has not sold chicken back for more than five years.

“We were on the list of importers for a number of years, and all of a sudden, we just got cut off. I made contact with the Ministry of Agriculture on several occasions, but to no avail,” said manager Kevin James.

He told The Gleaner that he continued to make applications for a year, all of which were left with a pending status.

The Integrity Commission had criticised the ministry for giving preferential treatment to applicants on the basis of prior importation history and suggested that the probity of the award process was compromised and hindered competition.

In a December 2020 report, the commission recommended that the ministry stop the issuance of import permits under current arrangements.

Jamaica imports around US$25 million worth of chicken back and chicken neck each year.

In an advertisement earlier this week, the ministry said that for the period April 1 to 8, registered entities will be able to make applications under a “revised regime”.

When questioned about the new regime, Agriculture Minister Pearnel Charles Jr said that the ministry was in consultation with stakeholders and that meetings were ongoing.

James told The Gleaner that he is contemplating whether to apply for a licence this time around.

The Integrity Commission report showed that between 2006 and 2013, CJ’s – formerly registered as International Meat Traders – imported 45 containers of chicken back. No products were imported for three of the eight years.

Over the said period, three companies imported in excess of 400 containers of chicken products each, and seven of 116 importers brought in 46 per cent of all the chicken neck and chicken back.

“Chicken back is not an extremely profitable product, but it sells quickly. The competition that would’ve been there is significantly reduced when the majority of goods are being imported by a small set of importers,” he explained.

James said had chicken back been the primary income-earner of the family business, which has been in operation for more than two decades, it would have ceased operation.

Another chicken back importer, who asked not to be named for fear of being victimised, called on the agriculture ministry to make import allocation lists public.

“We are still in the dark about the basis on which the allocations are made. We need some clarity, and the best way to make the process fair is to publish the amount each company gets so that it can be scrutinised. We just get an email saying: ‘[Name of company redacted] is authorised to apply for two containers’. We are not aware of who gets 30 or 20 and on what basis they were approved for so much,” the importer said.

He intends to make an application for an import licence when the portal opens on April 1 but is not convinced that the “revised regime” will be any fairer.

The importer, who has also been in the business for decades, said he is allotted three or four containers per issuance but has not received any in the last six months.

He explained that giving preferential treatment to importers is at the expense of operators who have built their business largely on the sale of chicken back, which is consumed in huge volumes among Jamaica’s poorest households.

“Let’s say I used to get eight containers and they cut me down to one. I already have a market for eight, so I am forced to buy from the connected parties at very little profit,” he lamented.

Meanwhile, the import officer at a north coast-based establishment told The Gleaner that she is taking a wait-and-see approach towards the revised regime.

“They always say that the process is fair, but you really don’t know what the next business is getting, if they get 10 or 100. Sometimes you just see the market flooded and you don’t get any,” she explained, adding that they are generally unsure of how much chicken products they will be allowed to import when they apply.

“People tend to be a little hush-hush about how many they get. So we really didn’t know until that report was published. Most times I get two containers, and it’s not necessarily every month. It’s maybe once every three months,” the import officer added.

In the commission’s report, some importers were also accused of blending in leg quarters among shipments of chicken back and neck to escape combined tariffs for premium parts that reportedly amount to as much as 240 per cent.

Charles Jr said the ministry continues to monitor the poultry sector and encourages that reports of illicit mixing be made to the ministry swiftly.

Earlier this year, the agriculture minister proposed a suspension of the common external tariff (CET) as well as stamp duties on imported leg quarters.

Such a move would slash the price of leg quarters by more than half – from $360 per pound to $160 per pound – making chicken meat more affordable.

“The ministry continues to monitor and evaluate the situation and will act accordingly to ensure that the best options is pursued that will redound to the benefit of all stakeholders,” he said in response to questions about a projected timeline for implementation.

The CET has to be ratified by CARICOM, but the minister said that the process is yet to be started. However, the ministry is in dialogue with the finance ministry to examine the possible economic implications.