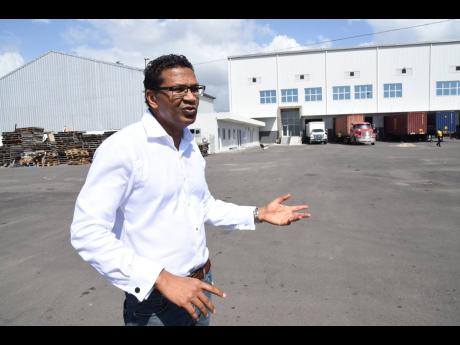 Ian Allen/Photographer
Richard Pandohie, CEO of the Seprod Group of Companies, says he and his staff get jittery each time a weather system threatens the island as the group’s Marcus Garvey Drive, Kingston headquarters is in a flood-prone area. 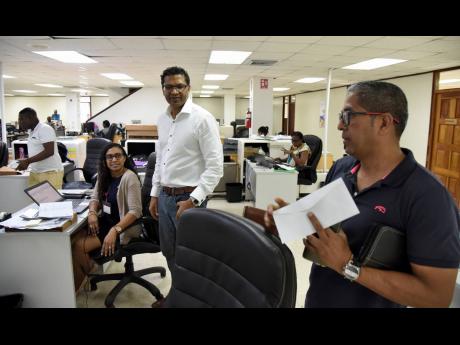 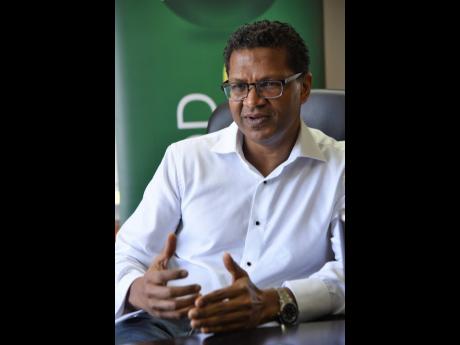 Richard Pandohie harbours no doubt that Jamaicans have the capacity to blaze a trail on any world stage and in any field, even when not given the best of starts.

For decades, his fellow countrymen have been tapping into their creativity and harnessing the power of that Jamaican drive to establish global dominance, influence and admiration in culture, academics, sports and a wide range of other areas.

But with regret, he acknowledged that the country’s crime crisis has been a major bane, restricting the island from making the strongest leap forward to realise its true potential.

Still, the Seprod Group of Companies boss is unimpressed with recurring states of emergency curtailing the rights of the majority of law-abiding citizens in sections of the island in a desperate effort to put a lid on wanton violence and he is further disheartened by the bickering between the Government and the Opposition while more lives are being snuffed out.

Born in the inner-city community of Cockburn Pen, St Andrew, and raised in Portmore, St Catherine, Pandohie considers himself among the generation of children who grew up knowing they were their parents’ pension. As a result, they worked hard to attain success as a return on their parents’ investment.

A married father of four sons between the ages of 18 and 23, Pandohie also mentors several young men, many of whom are unmarried fathers of multiple children, encouraging them to invest in their kids.

“ … The way the society is set up, we are growing – not [just] now, [but] for decades – a cohort of children that don’t have guidance. That’s why the criminals, they’re getting younger and younger. When they join gangs and those things, they’re looking for a family structure, a support system, and, of course, the gangsters see them just as an expendable resource,” he told The Sunday Gleaner.

The time for talking has long gone, said Pandohie, adding that Jamaica was well advanced in a “really bad way down the road” with inequalities breeding crime.

“The crime situation in Jamaica is not just a few gangsters and dons. It is organised business. Crime is a big business. And I think it has evolved way beyond where we have seen it before, it’s not just a few don men having children with women anymore,” said the former president of the Jamaica Manufacturers and Exporters Association.

Describing estimates of more than $300 million flowing into the island annually through lottery scamming as “phenomenal”, he said criminal organisatons were now “looking at people resources just like a normal business would”.

Youth were being lured into crime as an avenue to social mobility, he noted. And as players in organised crime grow in influence in society, many citizens are left cowering in fear and afraid to speak out.

“The violent nature of our crime presents a lack of confidence in the state organs, so nobody believes in the police anymore. They don’t believe in the court system because very few [crime bosses] get tried and put away because of what they do … ,” he argued.

Despite waning trust in the security forces, he noted that trapped in a vicious cycle, it was those “men and women who are between us and total anarchy”.

“It can’t be business as usual,” he insisted.

A multifaceted approach is required, which includes getting and keeping children in school and drawing a “line to say we have gone too far”, he pointed out, accompanied by a return to the death penalty for heinous crimes.

“Capital punishment should be brought back in. You don’t have to hang people. There are more humane ways to do it. I think there has to be clear consequences to brutal actions,” Pandohie told The Sunday Gleaner.

“All di bad man dem weh a kill off people, when dem get ketch, dem a beg fi dem life, a bawl fi dem mother. Dem only bad when dem have a gun in front of defenseless people. We need to send a message that if you want to be a bad man or a bad woman, when yuh get ketch – and you will be caught and tried – these are the consequences … ,” said the McGill University MBA alum.

And while aware that some countries could threaten to withdraw funding and other support to Jamaica should the country proceed down this path, he said: “The cost of crime in Jamaica is way more than the ... value of the grants we are getting.”

Further, he said, some of these countries were not doing enough to stem the flow of guns from their own lands into the island, with firearms featuring in the vast majority of the more than 1,400 murders across the island since January.

Pandohie does not accept that dancehall can be blamed for the mayhem in society, noting that the artistes are telling stories based on the realities around them.

But he is also aware of its influence, especially with drug use.

“I heard about molly. You couldn’t hear a current dancehall song that’s not talking about it. It’s a real reality in the society so I think we should be listening to the music, if nothing else, ... to get a pulse of what is happening in the society,” said Pandohie, noting that his fondness for the genre drew the consternation of his mother “who raised me well” as a Seventh-day Adventist.

Not only does he like dancehall – even more than reggae – but the business leader considers himself a good dancer, keeping up with the latest dances, telling The Sunday Gleaner that he starts his day with music.

Pandohie is especially hyped when he is overseas and hears Jamaican music blaring.

“The people who benefit from Jamaica’s brand are not Jamaicans, generally. We have not proven to be good stewards of our brands,” he said with disappointment.

With nearly three decades of diverse experience, the trained chemical engineer who dubs himself a transformational leader is looking forward to one day serving in the governance process; it’s his promise to give back.

Among the other key issues weighing on his mind are climate change and Jamaica’s haphazard development process.

Pandohie said that he and Seprod staff get jittery each time a weather system threatens the island as the group’s Marcus Garvey Drive, Kingston headquarters is in a flood-prone area, especially so since the major road upgrades were executed.

He noted that several business owners had expressed concern about the size of the drainage system during the road construction and that it was their intervention that forced a widening of the gutters. Still, that was not enough.

“I don’t know how the engineering designs were done, but I really believe it was inadequate. I look around [at] some of the construction I see in St Thomas, for example, and the infrastructure to take off [the] volume of water. Remember, you have to scale for extreme weather. The rain not going come nicely; you have to scale. Just like [when] you’re building a restaurant, you build for the capacity you hope to be at peak, not your average capacity,” he said, adding that while he believes the National Works Agency has great staff, he is questioning some of the design work.

“So yes, every time it rains, we start to worry. We look at the weather, and if we have to move staff out or if we have to get out, we do it,” he said.

While admitting that the explosion in high-rise buildings changing the Kingston skyline was “impressive”, Pandohie lamented that development is often not accompanied by the required infrastructural support.

He said that the country would have benefited greatly from a master plan showing how communities would be developed over time to prevent “haphazard and ad hoc” high-rise buildings being foisted on residents in communities without any discussion about rezoning.

“You have to have a vision of what you want the country to look like,” he said. “ ... To me, if you have the right links and have people working for you, you can put a building anywhere. There is no respect for the covenants.”

Pandohie is predicting that the parking nightmare in the city will also worsen.

“I am all for development and construction is beautiful to see, roads and everything. It’s visible evidence of programmes that everybody likes to see, but it should be done in an organised way, and if there is an organised way that they have already, communicate it,” he said.

“At the end of the day, people talk about people leaving this country, [but] ... what they want is a better quality of life. You want to live in a place where you feel comfortable, where you can work and educate your children and walk in peace. But you also don’t want the chaos around you … ,” he told The Sunday Gleaner.

“The place just hard fi live, y’know. It hard to drive on the road, it hard to lock up inna yuh house, everything just ... . Jamaica just feel hard and I think that kind of mental pressure that people are under is also a manifestation of why we also have so much domestic violence. It is just a constant pressure pot ... . It’s hard for people to come to work and then at the end of the month, the two weeks, it is barely enough to get you to work the next two weeks, so it’s a treadmill,” he said with a sigh.