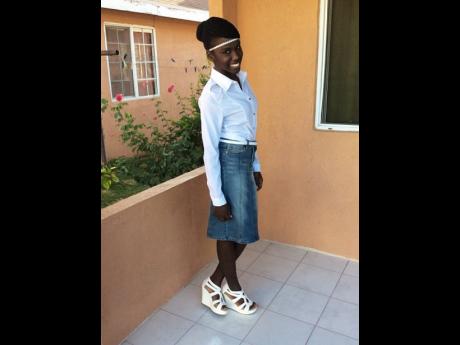 Sabrina Calder-Groves: the best thing about her Christian journey is having a peace of mind, knowing that no matter how impossible a situation might seem, the Lord always takes her through it.

Sabrina Calder-Groves says the best thing about her Christian journey is having a peace of mind, knowing that no matter how impossible a situation might seem, the Lord always takes her through it, a lesson she learnt the hard way.

"When I was about 13 years old, I went through a period of tremendous depression. I had low self-esteem because my father did not believe in me. He told me I was never going come to anything and he constantly reminded me how disappointed he was with me for not making it into a better high school," she shared.

That episode led her into a state of depression where she attempted to take her life.

"I took about 30 tablets and then I sat on the dining table waiting to die while going over the details of my suicide letter. When the pain started to get bad I went to my mom and told her that I was dying and she gave me some ginger/mint tea for the cramps and pain I was feeling" she told Family & Religion.

With tears in her eyes Sabrina said she prayed for deliverance which came instantly: "I said to God, 'Lord if you have a plan for my life, let me live after I drink this tea and if not just let me die, and if my life will be like this forever, don't let me live'. I drank one sip of the tea and I started to throw up and every single pill I had taken came up and after that all the stomach pain and cramps stopped immediately. In that one moment because the Lord saved my life I decided I was going to give my all to him."

She however did not take the water baptism until three years later.

She now worships at the Gimme-Me-Bit Seventh Day Church of God in Clarendon.

Since she embraced Christ she has had to deal with men initiating premarital sex, peer pressure at university, lies and deception and the list goes on.

As soon as she overcame one obstacle life presented another, but with faith, she kept overcoming them. Sabrina said after applying to pursue a bachelor's degree at the University of the West Indies (UWI), if it were not for fasting and prayer she would not have been accepted.

"I was not initially accepted by the university, however, knowing that a tertiary education was my only way out of poverty, I went on fasting all by myself at church one week before UWI's school year was scheduled to start. I stayed there for the entire days and while fasting, I poured out my heart to the Lord. At the end of the fast I felt peaceful and things finally fell into place: who could it be but God.

"I eventually got accepted and was able to start classes with a scholarship that I received from J Wray and Nephew. Today I am a third year student at UWI with a GPA of 3.64 for last semester," she proudly proclaimed.