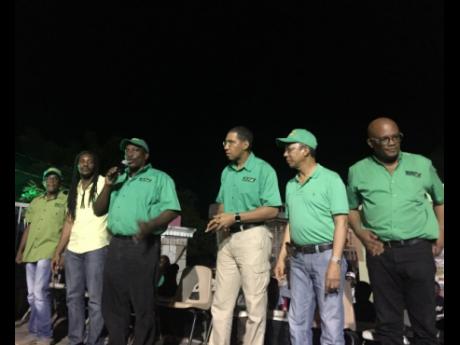 Chairman of the Jamaica Labour Party, Robert Montague, is questioning why Dr Angela Brown Burke, the People’s National Party (PNP) candidate for South West St Andrew, has not resigned as a councillor in the Kingston and St Andrew Municipal Corporation (KSAMC).

Montague, speaking at a JLP rally in Brainerd, St Mary last evening, called for Brown Burke to resign from being a councillor for the Norman Gardens division in the constituency of East Kingston and Port Royal.

“If she is a councillor, and she is so confident that she is going to win South West Andrew, why does not Dr Angela Brown Burke resign as a councillor out of the Kingston and St Andrew municipality?”

The JLP chairman who had previously served noticed that the JLP will be targeting the PNP’s politically safe seat of South West St Andrew, told Labourites that Brown Burke is remaining a councillor because there is no certainty of a victory for her come October 30, the date of the by-election.

“You know why she won’t retire as a councillor, she nuh so sure shi gweh tun member of parliament because the Jamaica Labour Party has set its sights on South West St Andrew and wi fighting it just as hard as how we are fighting South East St Mary,” Montague, also the member of parliament for Western St Mary, said.

Brown Burke, also a senator, has given no public indication as to when she will resign as both a member of the Senate and a councillor in the KSAMC.

She is the former Mayor of Kingston, appointed in 2012 and was first elected a councillor for the Norman Gardens division in 2003.

Brown Burke was recently parachuted into the PNP stronghold of South West St Andrew with the backing of former Prime Minister and Member of Parliament Portia Simpson Miller, who has held the seat for almost four decades for the PNP.