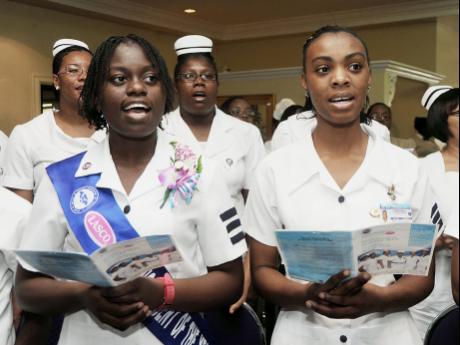 File
In this 2014 photo, Tameka Swaby (right), student nurse of the year 2013- 2014, and Aneshka Pommells, then third-year student at Knox School of Nursing, say the pledge during a Nurses’ Association of Jamaica function.

The University of the West Indies (UWI) is seeking to allay the fears of some students of its School of Nursing who are worried that the cancellation of the Span of Duty examination, which was scheduled for February, could impact their chances of getting their degrees.

As part of the requirements for the Bachelor of Science Nursing programme, students have to sit the Regional Examination for Nurse Registration, which has a written and clinical component dubbed the Span of Duty exam.

But the students were suddenly told that the Span of Duty exam was cancelled, leaving them concerned and upset.

Last week, the UWI told The Sunday Gleaner that while it is not to be blamed it will facilitate the sitting of the exam in June/July for the affected students.

According to the UWI, the documentation for the Span of Duty exam was scheduled for submission to the administrators, the Nursing Council of Jamaica (NCJ), on February 28, but on January 18 it was told that the submission date had been advanced to January 26.

"The UWI School of Nursing, in recognising that the students would have been inconvenienced by the sudden date change, made contact with the NCJ and lobbied for a change of the new date but was unsuccessful.

"It was not possible to reschedule examinations for the 15 students previously slated for the February 5-9 period due to the unavailability of clinical examiners and challenges in preparing the clinical areas for the examination, given such short notice, leading to the cancellation of the examination," said the UWI.

But the nursing students argue that the administration of the university is guilty of mismanagement as it should have known and informed them earlier.

"They just told us on January 23 after we were there preparing and planning. They told us that they didn't have enough examiners and they would not be able to sign us up for the April sitting of the theory so they just cancelled it completely," said one nursing student.

She charged that come the next sitting of the exams, they will be doing it with some 150 other students, and they are concerned if there will be enough examiners to accommodate them.

"We should not be in the situation now of just waiting because of their incompetence. It is not fair and it's not right.

But the UWI said it has spoken to the students and everything will be done to ensure their success.

"They will be assigned clinical areas at least four to six weeks before the examination to facilitate their preparation as is customary, to ensure their readiness for the examination," said the UWI.