Defeated Hayle promises to topple JLP at next poll 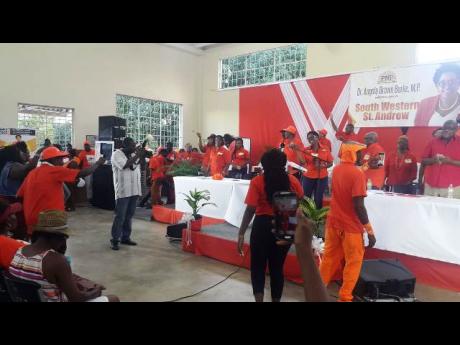 Months after an electoral defeat at the hands of Dr Nigel Clarke for the constituency of North West St Andrew, People's National Party (PNP) politician Keisha Hayle has sounded an ominous warning to the governing Jamaica Labour Party for the next election.

Speaking at a South West St Andrew constituency conference earlier this evening at the Caribbean Palm Community Centre, Hayle declared strong support for vice president challenger Dr Angela Brown Burke as she expressed strong confidence that she would help to topple the ruling JLP in the next general election.

"We are here to line-up behind Comrade Angela Brown Burke who will be continuing as VP. We will line-up behind her and ensure that her programmes and everything we endorse them," Hayle said.

She told Comrades not to worry about what she described as the setback of 2016. It was the year the JLP picked up 11 seats to pull off an unexpected victory against the PNP.

Brown Burke is among six seeking one of the four vice presidential positions in the PNP at the party's annual conference in September.

At the constituency conference this evening flyers for Phillips, Paulwell and Ferguson were distributed, though there were some Comrades sporting T-shirts with the name and image of McNeill.

PNP President Dr Peter Phillips is expected to address the gathering of Comrades later this evening.