UPDATE: Three guns seized as state of emergency takes effect in sections of the Corporate Area 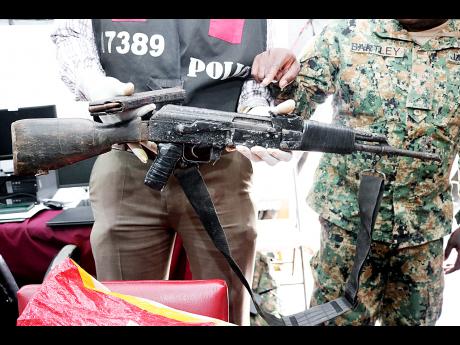 File
This rifle was found hidden in a rice bag by members of the security forces in the Flankers area of Montego Bay, St James, which is under a state of public emergency.

Three illegal firearms have already been seized by the security forces in the first 12 hours of the state of emergence declared in sections of the Corporate Area this morning.

Details of the seizures are yet to be released but The Gleaner understands that one of the guns was found in the area of west Kingston known as Lizard Town.

“A state of public emergency has been declared within specified boundaries encompassing parts of the Kingston Central, Kingston Western and St Andrew South police divisions effective today, September 23, 2018.  This will last initially for 14 days,” said Holness.

“The proclamation declaring the state of public emergency in these areas took effect at midnight.

“The Government considers it necessary to use the extraordinary powers provided for within the state of public emergency to address long standing crime and public order issues, which have threatened lives, indeed taken lives, curtailed businesses, undermined the rule of law and deprived citizens their general right to live peacefully and enjoy a good quality of life,” added Holness.

According to Holness, in deciding to impose the latest state of emergency the Government took into consideration the significant traffic flows through the areas, the commercial flows in the market district in the area, the back to school period which in its closing out stages, the hurricane season and the period leading up to the Christmas holidays, before making its decision.