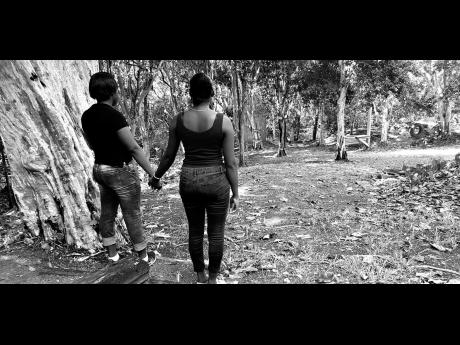 Contributed
Two sisters who were raped by their respective stepfathers, Malia and Alicia.

The energy in the room is light and there is laughter. There are no hints that the young women gathered in this space are anything but ordinary. They are relaxed and open. Until the conversation turns to forgiveness.

The girls suddenly flounder. Smiles give way to knitted brows and slumped shoulders.

Now, the room aches with the collective pain of the past. This is a telling reminder that they are, in fact, extraordinary.

In this group, brought together by Eve for Life, many are survivors of sexual violence. Some are HIV-positive, some are young mothers.

They are at a yearly retreat that is part of a long-term therapeutic programme of healing and empowerment for Eve for Life's young clients.

Malia*, age 14, and Alicia*, age 15, are among Eve's newer recruits. They are sisters who live with a sordid family secret - they were both raped at age nine by their respective stepfathers. Alicia contracted HIV as a result.

The sisters' relationship with their mother is deeply fraught with struggle. She has created a family of six children, each with a different father, which she cannot afford. She mistreats them and is often absent.

There are also deep scars of distrust. Their mother disbelieved them both when they told her about being raped. She continued relationships with the men who abused her daughters, dependent on them for food and money.

Alicia kept her rape a secret from everyone for four years after it happened.

"I was angry. But my stepfather was taking care of the family, and I didn't want to stop going to school," she said. "And even if I told my mother it wouldn't change anything, she wouldn't care."

When Alicia was 12, she developed a lump under her throat. She asked her mother repeatedly to take her to the doctor. It took two years before her mother complied.

"The results came back and I was HIV-positive," said Alicia.

"My mother cried, she broke down, but she still communicated with my stepfather. She told people I slept with him for money.

While Alicia slipped at school, Malia was reeling in a different way from the shock of her assault.

"I never expected it," said Malia. "He said he would tell my mother that I was the one who forced myself on him. I was scared. I think that is why I am so silent now, because if I say anything I feel like people will not believe me."

Nowadays, the sisters are more hopeful. They have spent the last several months being supported and encouraged by the team of life coaches, mentors and fellow survivors at Eve for Life.

"Eve is teaching me how to move on," says Malia. "How to live with the fact of what happened and push forward. They teach you to try your best not to step back, and how to be happy."

Despite attending school irregularly, Malia is determined to do well. "My goal is to get a grade one in CSEC math. I want to get a good education. I can do it if I put my mind to it."

Alicia is also ambitious. "I find strength because I know I want to achieve everything, have a car, a house and take care of my sisters and my brothers.

Editor's Note: Eve for Life is an NGO that runs a UNICEF-backed programme to support and empower survivors of sexual violence and provide mentorship to young mothers, some of whom are living with HIV. This includes monthly support group meetings, professional counselling, access to adult life coaches and peer mentor moms.

This was first published by UNICEF Jamaica.