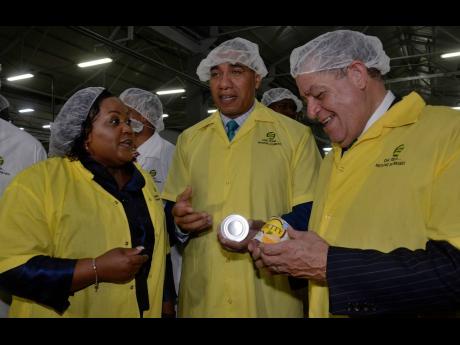 The Seprod Group of Companies is mulling over the feasibility of ploughing ahead with planting of coconuts and other crops after its impending exit from sugar manufacturing when it shutters its Golden Grove, St Thomas, operations.

Speaking at the launch of the Consolidated Serge Island Dairies Limited in Bybrook, St Catherine, Chief Executive Officer Richard Pandohie said his management team has been working hard behind the scenes to come up with profitable alternatives to fill the gap.

“The University of the West Indies has done a lot of work with other crops such as plantain and breadfruit, which we will also incorporate as raw material in gluten-free flour production. Bananas, an excellent nutritional source, will be used to produce banana porridge to target the School Feeding Programme. We do not believe that the nation can tax its citizenry to better eating. Our children’s nutritional deficiency will only be dealt with by producing affordable, nutritious products using the produce from our land.”

Pandohie’s statement was an apparent swipe at a swelling local movement that has engineered a ban on the sale of sugary drinks in schools and which is pressing for the taxing of foods chock-full of the sweetener. The advocacy groups have had the ear of the Ministry of Health and Wellness, which has vigorously agitated against enterprises chafed by its rebuke.

The Seprod CEO noted that Tuesday’s launch was a celebration for Jamaica’s agro-processing industry and was bullish on the prospects of the dairy industry if the value chain and multiplier effect were exploited.

“Agriculture and agro-processing can help to reduce poverty, raise incomes and improve security. For this multibillion-dollar factory to achieve its full potential and be the primary producer for our CARICOM domestic market, it will need raw material, and this can only come from a resurgence in dairy farming.

“... Investment has to be made by both the private and public sectors. With the right partnerships, policies and infrastructure, the transaction cost for farmers can be reduced and subsistence farming can be scaled up to viable commercial levels,” Pandohie said.

Noting that many Jamaicans spurn farming as a low-level occupation, the Seprod CEO countered that all major industrialised nations had an agricultural revolution before an industrial one.

“Global exports of agricultural food products have increased by more than four times in the last 30 years to approximately US$1,000 billion. However, agricultural commodities have experienced much slower growth in international trade than the processed products. ... To get inclusive growth, we have to keep climbing the value chain,” the Seprod CEO added.