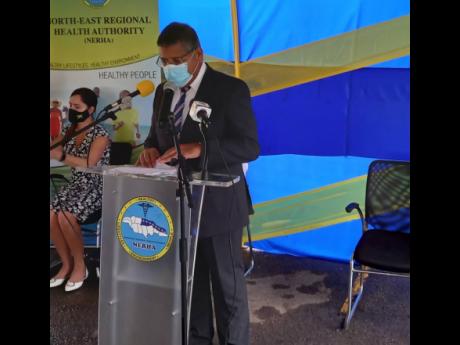 British High Commissioner to Jamaica Asif Ahmad said he is impressed with Jamaica’s coronavirus preparation, response, and state of readiness, noting that it is exemplary.

Ahmad was speaking at the launch/groundbreaking of US$1.3-million construction of a Smart Health Care facility at the Portland Health Centre in Port Antonio on Thursday, which will also see major renovation of the existing facility.

“We want to celebrate the partnership we have with the Ministry of Health and Wellness in Jamaica as well as PAHO (the Pan American Health Organization),” said Ahmad.

“And let me also say that the COVID mitigation that I have seen in the places that I am staying is absolutely exemplary. They tell you wash your hands, they say wear your mask, the TV remote control is covered in plastic so it can be washed every time. The attention to detail here is the best that I have seen anywhere in Jamaica and the world.

“I also owe a personal debt to Port Antonio for this project to go ahead because in some ways, it will repay an obligation I have to health workers in Portland. Two years ago, on my first visit to Portland, just after having lunch, I fainted. And I was rushed to the hospital for a check-up. It turned out to be the revenge of a lionfish which I had eaten,” he added.

The British high commissioner said he was revived by a medical team at the Port Antonio Hospital and later airlifted to the Kingston Public Hospital by a Jamaica Defence Force helicopter, which was made possible by West Portland Member of Parliament Daryl Vaz.

Ahmad said a debt is now being paid and the building, which is currently under construction, will not only make conditions at the facility better for nurses, doctors, other healthcare workers and patients, but it will also be more resilient to hurricanes.

He noted that it is not always easy to find money; however, retrofitting the facility is a priority, which will go a far way in improving patient care, creating a healthy environment, and to also maintain a high standard healthcare.

Minister of Health and Wellness Dr Christopher Tufton said the occasion is one that requires celebration as the Government of Jamaica is benefiting from funding from the people of Great Britain through the United Kingdom Aid – administered by the Pan American Health Organization (PAHO)/World Health Organization (WHO) to the tune of US$1.3 million.

“This funding is significant. It’s not a little bit of money. And it does speak to the commitment on the part the partnership between the UK, of course Jamaica, and our multilateral partner the PAHO/WHO group that provides critical benchmarking around best practices in public health,” said Tufton.

“And in this instance, best practices are being manifested in the smart healthcare facilities in the Caribbean project. This represents the first of four facilities to benefit, but we will see some 21 other public-health facilities capturing the critical theme of resilience, and this is very good.

East Portland Member of Parliament Ann-Marie Vaz said everyone should be proactive and implement mitigating measures, in order to combat impending disasters rather than to become reactive.

Shalim Jagnarine, PAHO technical consultant for Smart Projects, said the programme is made possible through the funding of the UK Foreign and Commonwealth Development office in collaboration with the Ministry of Health.