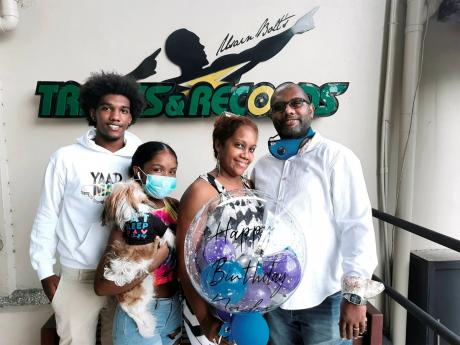 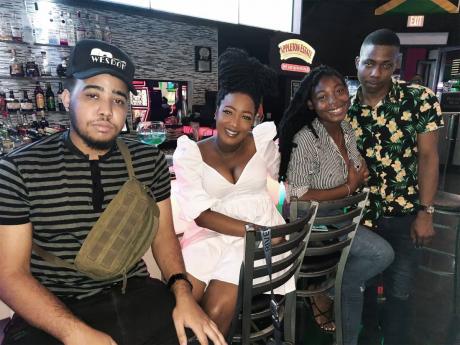 The ISSA/GraceKennedy Boys and Girls’ Championship 2021 did not see many schools’ branded paraphernalia or vuvuzelas, but the final day ended with some supporters in the Corporate Area glued to screens at sports bars to bring down the curtains.

Though they appreciated the air-conditioned room, alcohol, and big screens, it’s nothing like being inside the National Stadium for these avid Champs fans.

Nadia Coke-Norton, who is described by her husband as a ‘champs aficionado’, celebrated her birthday at Usain Bolt’s Tracks and Record restaurant and sports bar on Saturday.

The family initially went to a different restaurant for her birthday dinner but frantically switched locations because the restaurant was unable to find TVJ to stream the event live. Having predicted that Calabar would not have made it, Coke-Norton had her birthday balloons prepared in purple and blue to commemorate Jamaica College and Kingston College.

“This is something that we really look forward to every year,” she said. “I am 47 today, and I have been attending since I started Alpha in ‘85,” she said, underscoring that there was never a year she was not in the stands cheering.

Coke-Norton, who keeps up with several Champs WhatsApp group chats, is a Calabar supporter who started sharing allegiance with Kingston College once she got married to her husband, Ainsworth Norton, who is a diehard ‘Fortis’.

“I kinda had the prediction that it would have been a battle between the two colleges this year. I made the prediction two weeks ago,” said the sports mom, posing with her purple and blue birthday balloons.

Though JC came in first with 328.50 points, 15.5 more than KC, Coke-Norton said that it was bittersweet “even when KC comes second, they are still winners”.

The all-boys school of true blue won for the first time in 10 years. Edwin Allen High won for the girls with 340 points.

Over at TGIF on Hope Road, two women – Calabar and KC supporters – were enjoying friendly banter. Melissa Moo-Young sat at the bar counter in her Kingston College jersey filled with emotions.

“I am not really pleased, enuh, because it’s one of the four TVs showing Champs. It doesn’t make sense to me,” she lamented.

“Nothing beats being inside the stadium. Just a while ago, a me alone inside here a shout. Everybody a look pan me like me mad. Me all a beat up the counter,” she continued.

Though she is a former student of St Andrew High School for Girls and St Hugh’s High School, both sister schools for Jamaica College and KC, respectively, the latter has first place in her heart.

She recalled being eight months’ pregnant with her second daughter in 2015 and running through the stadium with her six-year-old daughter, who was dressed in her purple and white outfit.

“I have a nine-month-old now, and is a little boy, and him haffi go a KC,” she raved.

Admitting that her cheering has been unbearable for her household, Moo-Young drove by the stadium, hoping they would let her in, but she was told a firm no.

“The next best option was a sports bar,” the 38-year-old told The Gleaner, especially since she facilitated online school all week. Usually, she would be at the National Stadium Grand Stand on Wednesday and Thursday.

“You see on di last day, if it’s even on the top of the pole weh go round the stadium dem waa put me, me all right. As long as me inside a di stadium,” shared Moo-Young, who believes that she was a runner in her past life.

The big-screen live viewing in sports bars has changed the heart of JC supporter Chevaughn Swaby from the stands, but it has also turned fresh eyes, such as those of Preston Bogle, on to the track and field competition.

“I have never been and I have never watched. I still won’t go, but I am going to start watching it,” said Bogle, who was the only one of his group of friends glued to the screen inside 100 Hope Road.

Across the sports lounge, a group of friends sat at the bar specifically to enjoy the final day of Champs 2021.