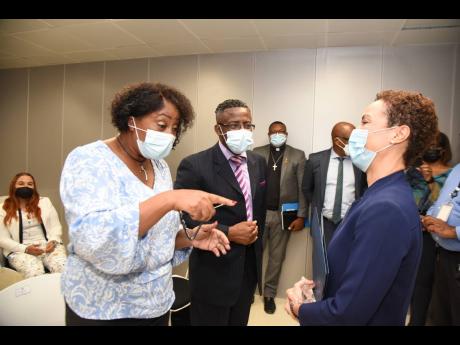 Kenyon Hemans/Photographer
Dr Pearl Jarrett (left), CEO of the Jarrett Foundation. and her husband, Dr Errord Jarrett, managing director of Jarred Med Tech, interact with Kamina Johnson Smith, minister of foreign affairs and foreign trade, on Thursday. They attended the handover of two million face masks for distribution to the Government and non-profits.

Two million face masks were donated on Thursday to the Government and non-profits by a Britain-born philanthropist of Jamaican descent.

The anti-coronavirus protective gear will be distributed among the health and education ministries, service organisations, non-profits, churches, and underserved communities.

The donation was made by Dr Pearl Jarrett, group CEO of the Jarrett Foundation.

Born to Jamaican parents, Jarrett felt compelled to give back to her roots. In collaboration with a UK manufacturer and distributor of personal protective gear, Full Support Healthcare, and Ketan Makwana Foundation, the Jarrett Foundation gifted Jamaica more than J$130 million worth of masks.

The masks were accepted at the downtown Kingston headquarters of the Ministry of Foreign Affairs and Foreign Trade.

Dr Kasan Troupe, acting chief education officer of the Ministry of Education, Youth and Information, said that the gift would boost the Government’s efforts to resume face-to-face classes in September.

“This kind of support will be benefiting students who will be in need, and, therefore, will have an opportunity to benefit from education because [of these] resources,” Troupe said.

Jarrett was urged by her Jamaican colleagues to visit the island in 2012 to participate in the 50th Independence anniversary celebrations. What was planned as a quick turnaround ended up as a love affair with the country.

Instead, Jarrett has made a monumental impact through contributions to the education sector.

“This is now our base in the world and our home,” she said.

The foundation has, thus far, donated more than $45 million worth of school furniture, 27,000 exercise books, and resources valued at approximately $5 million.

Jarrett said that her work here is not done as she has other plans to give back to Jamaica.

The foundation is currently engaging the Government in discussions about solar and water projects.