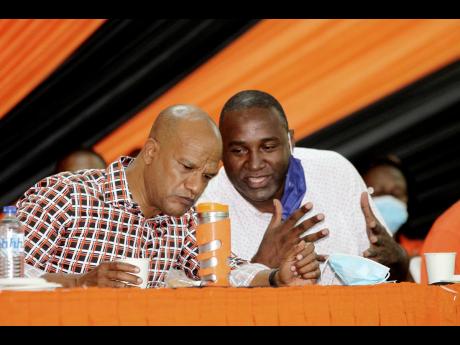 Drawing on biblical imagery in a fired-up address on Saturday, People’s National Party (PNP) General Secretary Dr Dayton Campbell cast himself as a modern-day Job under Satanic attack and delivered a rebuke to unnamed members whose support to the political movement was conditional.

Reaffirming his commitment to the PNP, Campbell hyperbolically told partisans gathered at Manchester High School that even if a million more supporters left the party, he would not be numbered among them. The PNP has 45,000 members.

“No matter what is going on, I am PNP yesterday, today, and tomorrow. No little breeze can’t rock me off the PNP party,” he said, adding that some persons only supported the PNP at times of convenience.

Snarkily dubbing them ‘If PNP’, Campbell poured scorn on supporters who would only stand by the party to get school supplies, farm work tickets, or have drains in their community cleaned.

The general secretary called for ‘even though’ backers – supporters willing to sacrifice all for principle, as did the Old Testament figure.

“All when the PNP slays me, I will support the PNP,” Campbell shouted, eliciting cheers and whoops from the crowd.

His entreaties come amid turmoil in the opposition party, which recently suffered shock resignations of its chairman, Phillip Paulwell, and three vice-presidents, Damion Crawford, Mikael Phillips, and Dr Wykeham McNeill, at the height of nominations ahead of the PNP’s annual conference in September.

That action was purportedly taken to avoid a bruising contest among contenders, but the dramatic nature of the resignations is evidence of fracture linked to internal leadership elections in 2019 and 2020.

Campbell, in an interview with The Gleaner, said that PNP President Mark Golding sought, in National Executive Council meetings on the weekend, to open arms to all Comrades and took responsibility for some of the events that have transpired.

“We are committed to doing the work of ensuring that the party is viable, and outlining some of the work that has been done so that the Comrades can fully be apprised as to what is taking place,” the general secretary said.

Campbell, who has filed a defamation lawsuit against PNP firebrand Karen Cross and social-media personality Natalie Slack, has fended off calls for him to resign while the judicial process is under way. Cross and Slack were ordered to pay $750,000 each for failing to remove the allegedly defamatory posts and not republishing similar content.

Stating that he harboured no ill will against anyone, Campbell, a medical doctor, said he was simply trying to clear his name.

“Love them that hate you and them that persecute you.”

“Those who know me, know from day one what I am capable of, they know what is not true, but it is a process that you have to go through when somebody says something about you, and I am going through those process to ensure that it will say to persons that I am not guilty of what persons have said,” he stressed, referencing Cross’ unsubstantiated claims of sex crimes.