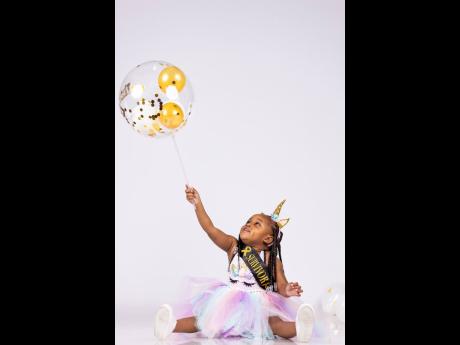 IN WHAT seemed to be the fight of her life to save her daughter’s life, Cherefa Francis said a miracle presented itself at the right time, giving her child another shot at life.

“I had reached out to her weeks before out of desperation but did not get a response. Within 10 minutes of the first chemo being administered, we got a call from Dr Debra Williams who begged me to quit chemo and promised that she’ll help me to nurture Baby K back to health.”

Confused and left to ponder how her decision to cease standard treatment would be viewed, Francis admitted that, initially, it was one of the most difficult decisions to make.

“I got no reassurance from the doctors that she could live. The moment she [Dr Williams] opened her mouth, I trusted her, and was convinced she was ready to fight with us based on the passion in her voice.”

She said from there, Williams directed her diet and offered emotional, spiritual support and even lifted financial burdens.

“She guided me through the process of purifying my breast milk and using it as the main source of healing. So yes, it was my breast milk that saved her. My diet was 100 per cent whole foods vegan diet; everything I consumed was prepared in my kitchen from natural herbs and food. I started juicing, using alkaline water utilising sunlight and fresh air more. It took a higher form of discipline but it was worth it. I had no quick fix.”

Francis had to become the vessel that would heal her daughter, Khassidy Francis and as a result, had to remove all toxins from her body by eliminating the use of regular cleaning, hair and body care products and even creating her own.

“It was this lifestyle that led me to create ‘Keele Naturale’ that aims to provide natural product for hair and skin. After my daughter’s hair loss and damage of her texture after chemo, I started to experiment with hair products specialised for growth and after seeing the progress, it was requested by immediate family and then others in my circle and it quickly turned into a business.”

Francis also swears by sea moss as a great healer that even today is added to her baby’s formula.

“I deeply recommend sea moss in all diet, for everyone. It has been a major ingredient in our fight. My baby still has it everyday and she has maintained healthy weight, her brain is well-developed, and she has never had flu or any other form of sickness. I want everybody to experience the power of some of my favourite herb and that’s what we wish to serve at Keele Naturale. I want to be a part of others health journey and use the knowledge I have learnt over the years to help individuals achieve holistic health.”

Describing her immediate family and friends who became family as the support system she needed to get through the difficult days, Francis said she also learned that being around persons with little to no faith will create a toxic healing environment.

“I could not have done this without my immediate family’s show of love and support. Throughout the process, I distanced myself from people with little faith. Nobody knew of the plan to quit chemo other than my big sister and my best friend who did everything to ensure I did and when the pressure heightened and I wanted to stop, she ensured I didn’t look back.”

There was no greater joy for Francis than the subsequent ultrasound which confirmed there were no cancer cells in the liver, the liver was sized normally and her daughter was tumour free.

“The day before I was surrounded by doctors holding my six-week-old and being asked if there is anybody in my family with cancer, I too was living a happy life, with no worries of being sick,eating all the junk. My encouragement to all mothers is to try your best to be proactive and encourage healthy eating among your children. Even mothers with an ailing child, it is never too late to start,” Francis recommended.

With a file of more than 200 pages containing reports on the odds that were lined up against her daughter, previously given to her by doctors, Francis is now more hopeful for the future of her healed daughter.

“That file is the evidence of her strength, in case she needs to be reminded. I’m looking forward to all the odds my baby is about to push through. I want to see her embracing every season of life; dancing in the storm, fulfilling her purpose, and continuing to be spirited, loving God and persevering,” Francis noted.