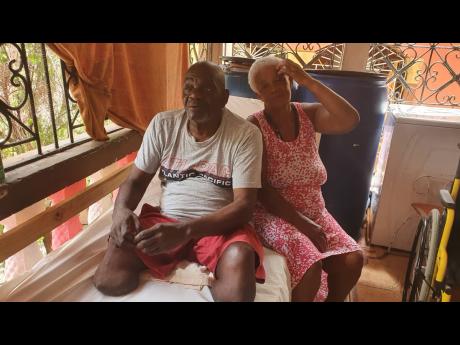 Janet Silvera
Amputee Castel Cunningham and his wife Millicent Clarke, who are both diabetics, are two of the 110 recipients of the i-doc health club card that is being issued to people unable to afford some healthcare services or access medical facilities in the public system. 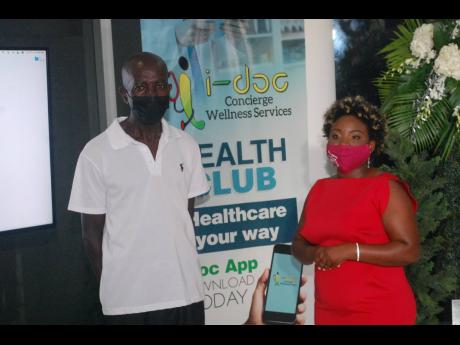 Eighty-one-year-old diabetic amputee Castel Cunningham and his wife Millicent Clarke, who suffers from hypertension, are among 110 people afflicted with lifestyle diseases to benefit from i-doc health club’s multimillion-dollar healthcare intervention.

The i-doc Concierge Wellness Services initiative, which was launched last Tuesday in Montego Bay, will see the group of private doctors spending approximately $7 million to provide access to healthcare for hundreds who are unable to afford it.

The prospective recipients, between two and 90 years old and diagnosed with various chronic medical conditions, with get unlimited telemedicine consultation, doctors visit for a year; access to a fitness and nutrition programme, discounts at pharmacies and laboratories, and access to the 24-hour support centre for emergency and medical queries.

“On average, we spend $20,000 per month for doctor and medication,” Cunningham, who had a medicine chest packed with different boxes of the prescription items he has to use monthly.

Unable to move from his bed to his wheelchair because of weight gain associated with his sedentary living, Cunningham said this intervention, which includes a nutrition programme, could not have come at a better time.

Clarke, who says her husband is also seeing signs of kidney disease, noted that he had been complaining of uncontrolled hypertension in recent weeks, and she herself does not have control of her eating habits, even though she has diabetes.

The two, who reside in Quarry Heights, off the Salt Spring Road, will start receiving the medical benefits as of August 3. Dr Sherridene Lee, managing director at i-doc, told The Gleaner, noted that of the 110 club members from western Jamaica, 10 will be assisted by way of hernia repair surgery at a value of $1.2 million.

The medical doctor, who has offices in Negril, Ocho Rios and Montego Bay. said the aim is to utilise pooled funds from the health club towards building in-house hospital facilities that are for the people, made possible by the people; affordable renal dialysis units and oncology and cardiology centres.

“The reality is that healthcare is an expensive commodity and at this point, our free healthcare system is underfunded and overburdened,” Dr Lee said. “Unfortunately, Jamaica has only two healthcare arms: either the private- or public-sector healthcare system. In their present incarnation, neither one is currently ideal for the masses. Now is the time for an alternative.”

The health club, she said, will afford members the benefits they can’t afford otherwise.

“Imagine a Jamaica where you don’t have to sit in a chair for days if you can’t afford a whopping hospital bill; where one doesn’t have to cut down the number of dialysis for the week, because money has run out; Where a loved one doesn’t die because they can’t afford the appropriate chemotherapy drug,” she told guests during the launch of the health club.

Health club card members will pay a $500 for doctors’ fee, while an X-ray will cost $1,000, the i-doc managing director stated.