Scholar living by faith, not sight 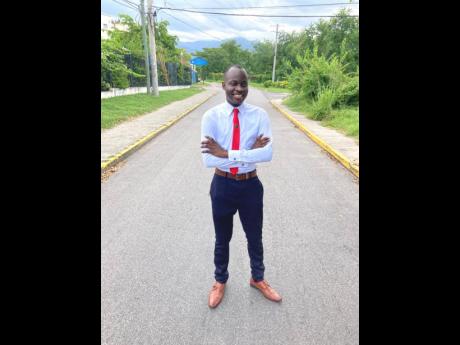 Twenty-four-year-old Randy Greaves has been blazing a trail of his own.

Though born with four conditions that make him visually impaired, he is a university graduate and now a master’s student.

He underwent cataract surgery at age two and laser surgery in 2018.

Greaves, who hails from Kinloss, Trelawny, said navigating his childhood years with visual impairment was tough.

“Getting an education was challenging because I had to hold books very close to my eyes, and when I had to copy work from the board, I had to go up to the chalkboard and that would be a bit inconvenient to other students,” he said, adding that he was a victim of bullying, as not all students were understanding of his impairment.

Sometimes he sat in class and did no work or borrowed a classmate’s book later in the day to write notes.

He recently completed a Bachelor of Basic Medical Sciences degree in pharmacology, with first-class honours, at The University of the West Indies (UWI), Mona.

“I had to do even more reading and for prolonged periods than the average person. People do all-nighters when it’s exam time, but I have to do that throughout the semester, because it takes me a longer time to read,” he explained.

Greaves, the third of four children, told The Gleaner that he and his family were looking forward to his graduation ceremony from The UWI, but that did not materialise, owing to the COVID-19 pandemic.

“My parents are always proud of me and they are always involved in my academics. When I sent my mother my graduation picture, she texted me and said, ‘I feel like I win a million dollars.’ When I do well, it motivates them to want to help me more,” said Greaves of his parents, who he said are poor farmers.

Scholarships, primarily from the National Commercial Bank (NCB) Foundation, have been the driver of his academic goals.

He is thankful for the outreach from the foundation, which has funded laser surgery and financed accommodation fees with a one-off grant.

“NCB really stood with me throughout university,” a grateful Greaves said.

A 2021 Commonwealth Scholar, he is pursuing an MSc in cancer research and precision oncology at the University of Glasgow in Scotland.

“I am fascinated by the biology of cancer, like how cancer grows and the various things cancer has to evade in order to survive in the body. There isn’t a lot of work being done in Jamaica where cancer research is concerned, possibly because of funding,” Greaves said.

The master’s student said that he began his search for schools in the United Kingdom (UK) from the first year of his pharmacology programme but knew that funding would be an issue.

With that in mind, he applied for the Commonwealth Scholarship and the Rhodes Scholarship, but was not successful in the latter.

He is adjusting well to life in Scotland and shared that it is very cold, even though it isn’t yet winter.

Greaves is also the 2021 Governor General’s Achievement Awardee for Trelawny.

Though excelling academically, the reality of his sight affects him from time to time.

“I get discouraged at times because of my visual impairment. There are times when I ask God why I was born like this. People have underestimated me, but I have been able to do a lot of the things people said I couldn’t do,” he remarked.

Greaves noted that the opportunities in the UK are endless and his aim is to continue working in the field of research and earn his PhD.