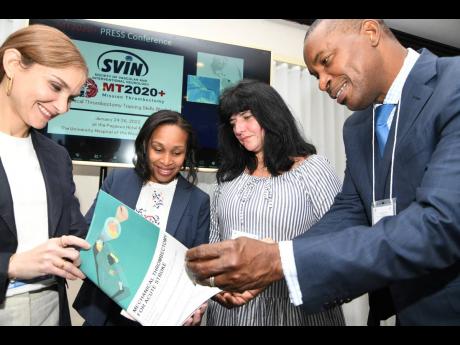 With stroke being the leading cause of death in Jamaica, and one of the main causes for disability, physicians at the University Hospital of the West Indies (UHWI) are pushing to make life-saving treatment available to the more than 2,000 Jamaicans who suffer from a stroke annually.

An advanced certification in mechanical thrombectomy (MT), a blood clot-removal surgery that can only be performed at an accredited stroke centre, is being pursued by the St Andrew-based hospital as part of an urgent response to the significant number of citizens leaving the facility with mild to permanent disability from a stroke.

“The natural history of stroke recovery without any intervention reveals that 40 per cent of patients will have moderate impairment requiring special care after their stroke, and a further 25 per cent will be totally dependent, requiring nursing care.

“That’s why this intervention is so necessary,” Dr Tameka March, head of stroke care at the UHWI, told attendees at the launch of the Mission Thrombectomy MT2020+ Training Workshop yesterday.

The certification will be made available free of cost to the UHWI, with the assistance of the World Stroke Organization.

“They agreed to assist us with certification, so that we will gain worldwide accreditation for administering these procedures for patients with stroke,” March later explained in an interview with The Gleaner.

The consultant internist indicated that the burden of stroke weighs heavily on the Jamaican population as a result of a combination of lifestyle choices and cultural attitudes about health. This is further compounded by inadequate healthcare facilities and the lack of proper treatment, once patients end up at hospitals.

Pointing to a retrospective study conducted at the UHWI which found that 20.6 per cent of patients had a large artery, or atherosclerosis stroke subtype, March expressed concern at the lack of proper treatment in hospitals.

“Most persons presently who have been discharged from our institution with a stroke will be left with some deficit. Most times patients who have a stroke, they come in not speaking, not walking, not swallowing. And without these life-changing procedures, they go home still suffering from these conditions, and therefore become totally dependent on their relatives. If they can afford nursing care, they will be institutionalised,” said March.

“Without these procedures, the burden on stroke will be very heavy, they can’t return to work and, therefore, they can’t earn and most times they become a burden to their families,” she added.

The physician further indicated that the majority of stroke patients who end up at the hospital, present with a subtype of stroke that is associated with uncontrolled high blood pressure, uncontrolled diabetes, lack of exercise and smoking.

“So, all of our patients who are hypertensive, diabetic, they need to have extremely good control of their illness. For those who are smoking, the advice is to stop smoking.

“And then, there is also a lot of taboo about not taking medication, not going to the doctor until you’re ill, waiting for something to happen before you have a check-up. These are things we need to change,” advised March.

Coming out of Monday’s workshop, four neuro-radiology and neuro-surgery Jamaican physicians, along with their nurses and technicians, will have been trained in administering the MT surgery, alongside three other physicians from Honduras and the Cayman Islands, respectively.

The training, facilitated by the Society of Vascular Interventional Neurology, marks the first MT training workshop to be held in the Caribbean.