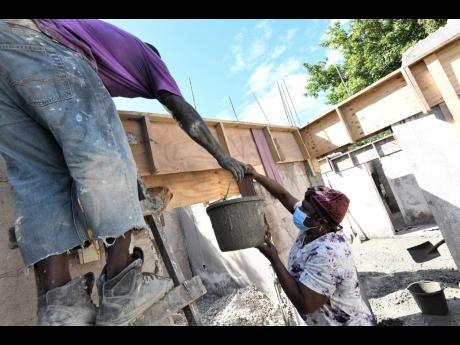 Rudolph Brown/Photographer
Residents of August Town, St Andrew, help to rebuild a house that was destroyed by fire on Boxing Day 2021.

Retired soldier Hector Simms and musician David Douglas lost all they owned when their home was ravaged by fire on December 26 last year.

Community members have come together to repair the two-bedroom home they shared in August Town, St Andrew.

On Boxing Day, he got up to make some tea and recalled hearing sounds coming from Douglas’ room but assumed it was related to his usual musical experiments.

“The sound was getting louder, and I called out to him and asked him how him wake up and making noise so early, and then I saw a gush of fire. At that time, I realised that the door was closed and he was not there. The fire just spread quickly through the place,” recalled Simms, who only managed to save his passport and a pair of pants.

Douglas got a call that his home was on fire and told The Gleaner that he was devastated when he got to the scene.

“I was standing in the middle of the road. I was speechless because I lost everything,” he said.

It is believed that the fire was caused by an electricity overload.

Since the fire, Simms, who is a member of the Jamaica Legion, has been residing at Curphey Home in Manchester, and Douglas has been staying with his girlfriend.

“I am grateful for the assistance that has been forthcoming,” Simms told The Gleaner.

Meanwhile, Douglas said he suffered great loss and would appreciate any assistance to help him in the rebuilding process.

Simms’ niece, Rosemarie Bishop, who lives next door, said her household was indirectly affected by the fire.

“We didn’t have any light or Internet from December, until way down in January, but we made it through. We buy our kerosene oil and light our lamp. We are grateful that no life was lost because it would have been more devastating,” she said.

Bishop said she is thankful that residents have rallied to help those displaced by the fire, adding that it exemplified a slogan often used in the community: ‘One August Town, strong August Town’.

Garfield Thomas, member of the justice centre, pitched the idea of bringing people together to work on the house.

“Persons came and cleaned up the debris, and today we are here again to do some construction work. These workmen are all the way from Hermitage, which is a different community,” Wilson said.

He added that a fundraiser would also be organised to help the occupants get back to a place of normality.

“We are our brother’s keeper, so we have to lean on each other and constantly try to produce acts of kindness,” Wilson remarked.

Donations can be made to the following accounts:

Branch: University of the West Indies

Branch: University of the West Indies