Patrick and Sandra Sinclair – cherishing the love of a lifetime 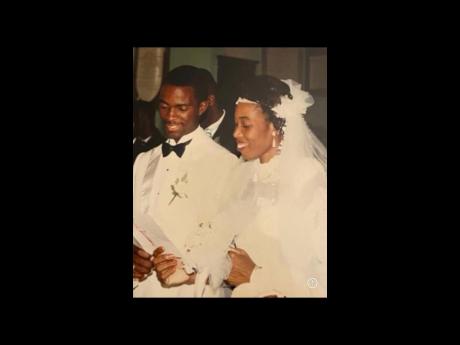 Contributed
The Sinclairs on their wedding day. 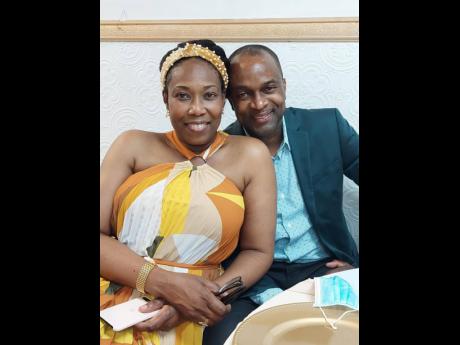 Patrick and Sandra Sinclair celebrated their 30th wedding anniversary on December 14 last year, and for them, it is an extension of the love that started in their late teens.

Hailing from adjoining communities of Savannah and Raymonds in Clarendon, they knew each other as children growing up but never exchanged a word. Patrick attended Glenmuir High School, and Sandra went to Clarendon College. She recalled seeing him walking past her house several times a week.

That trend continued until in 1985 when she boarded a minivan and sat in the front. Patrick came on later and as they exited, their “eyes made four”, and instantly, there was a connection!

“He raised his brows at me and I smiled. We both got off at the last stop ­– May Pen,” she reminisced.

Patrick admitted that even from those days he knew that Sandra was for keeps. He said that as she hurried away, he boldly started a conversation. Always perceiving her to be aloof, he was pleasantly surprised that she actually entertained him and didn’t rebuff his efforts.

“That was the genesis of our relationship as I made sure to walk by her house more regularly and stopped at her gate so we could talk. Soon after, I asked for her work number, and I would call her multiple times per day. It turned out that she was one of the most genuine, gentle, and sweetest persons one could meet. I just felt different when I was around her and had to tell my mother about her,” he shared about his courting days with the love of his life.

Patrick added that he has never felt such a connection like the one he had with Sandra then, and 30 years later, nothing has changed.

However, their relationship was put to the test when a couple of years into their romance, Sandra decided to go to teachers’ college, which resulted in them being able to see each other only on weekends.

She needn’t have worried as Patrick made up for the absence by calling her every day after classes.

“I remember lying on my bed in the evenings waiting for someone to shout out my name and running down to the common room to take the phone call. Sometimes during the day when I had a free period, I would make a collect call to him on the payphone. He would travel to my school on a Saturday to spend the day with me, or I would go home, and that was virtually every weekend,” she said.

Sandra said she had no doubt that she had found true love by the way he made her feel special when they were together – she was happy and had butterflies in her stomach whenever she thought about him.

She credits the longevity of their union to them being good listeners as she said being humans, they have their differences and don’t always see eye to eye, but they combat those times by ensuring the communication lines between them are never broken, which allows for a quick resolution to whatever disagreement they have.

“We have learned that listening is a skill that needs to be included in marriage. Hence, we listen to each other, and for us, there is no problem in apologising to each other. Pride is not a vice we cultivate between ourselves,” she said.

Patrick, who has had eyes only for Sandra since day one, said she is the only girl he ever introduced to his mother as a girlfriend. Since that introduction, he said there has always been love, respect, and a close bond between the two of them until the day she died. That, he said, was of uttermost importance to him.

And as far as his mother-in-law is concerned, Patrick enjoys the same status with her, or even more, as Sandra noted that her mother confides in him even more than she does in her.

Commenting on some of the things that cement their relationship, Sandra said they “pray, play, eat at least one meal together and act silly with each other daily”.

“We love, respect, and admire each other and have the same goals and desires. Apart from the fact that we deeply love and trust each other, we are best friends who actually like each other. These truths, along with our three children, bind us together. People are often surprised to know that Patrick talks a lot as he appears to be more reserved than me. He likes to sing and dance when we are cooking. He can cook, but I won’t comment on his singing and dancing,” she teased.

And if there is one thing left on their bucket list to do as a couple, Sandra shared that it is to travel to a couple of countries in Africa as to her, it is the most fascinating continent.