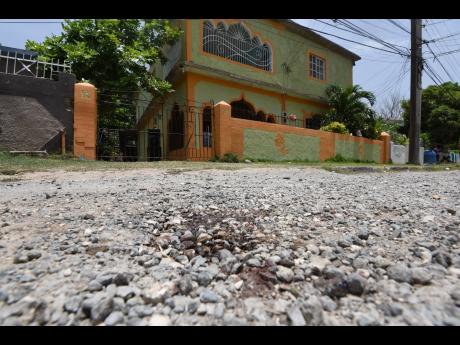 Ian Allen/Photographer
Blood stains mark the spot where 59-year-old Marcia Dillon was gunned down in Spaulding Gardens, Central Village in St Catherine on Friday night at the wake she was hosting for her mother.

Fifty-nine-year-old Marcia Dillon travelled from the United States to Jamaica with the intention of burying her mother, but she was denied that opportunity when she was gunned down while attending the wake on Friday night.

It was an air of sadness in Spaulding Gardens, Central Village, in St Catherine yesterday, as the planned trek to St Mary to bury Dillon’s mother was abandoned.

“I was getting ready to go on the bus to the funeral, but them cancel the trip out of fear,” said a woman claiming to be the cousin of the deceased.

She added, “This is a planned shooting; they come for Miss Marcia because them ask someone to call her out of the house and as soon as she came outside the gate, them fire a whole heap a shot on her.”

Dillon was reportedly shot after two mask-wearing men traveling on foot opened fire at her. She was pronounced dead at the Spanish Town Hospital.

Two elderly men – a 77-year-old and a 70-year-old – were also shot and are now hospitalised.

“What we are seeing is part of a trend where gangsters turn on family members when they are unable to get to their intended target,” said Phillips.