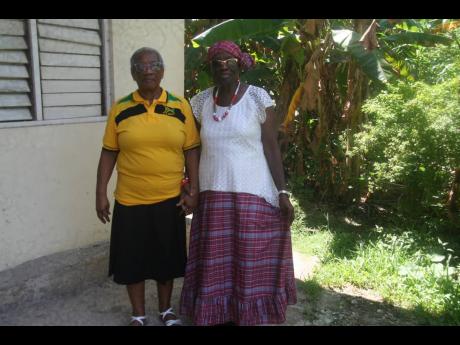 Bryan Miller
President of the Hanover chapter of the Retired Teachers Association (RTA), Merletta Donaldson (left), and a member, Matilda Wainwright-Bowen, who is dressed in the Jamaican bandana, get ready for their presentation at the meeting of the group on Tuesday October 4. 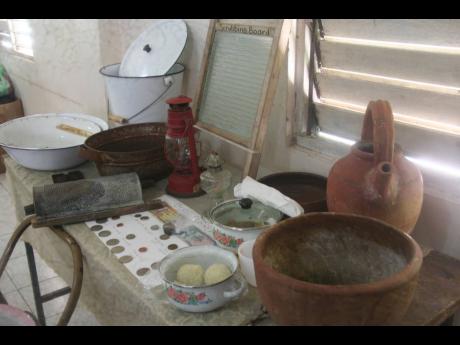 Bryan Miller
Cultural artefacts on display at the October meeting of the Hanover Retired Teachers Association on Tuesday, October 4,
1
2

WITH OCTOBER being observed nationally as Heritage Month, the membership of the Retired Teachers Association (RTA) of Jamaica, Hanover chapter, has decided that they will not be left behind and have begun to play their part, at least in their respective communities, to commemorate the occasion.

The October monthly meeting of the chapter, held at the Lucea Seventh-day Adventist Church Hall, turned out to be one that brought back memories of how things were done several years ago, as the group performed songs that used to be popular back then, recited poems, shared riddles, stories and popular sayings, to rejig the memories of all in attendance. Even the dresses worn by the women to the meeting were as colourful as the nation’s past, with the attractiveness and history evident at a glance.

President of the chapter, Merletta Donaldson, told The Gleaner that the RTA Hanover chapter has been in existence for 26 years, with several of its members having given decades of service to the education sector before retiring.

“Because this month is Heritage Month, and we only meet on the first Tuesday of each month, we are having our own heritage celebrations today,” she explained.

“We meet monthly, except for the months of January and August, when we take a needed break,” she stated.

Donaldson pointed out that the membership is made up of retired teachers from all levels within the education sector: principals, senior teachers and former teachers at the basic, primary, secondary and tertiary levels.

“Today, we are showcasing our African heritage and as such we will have food, folk songs, proverbs, Anancy storytelling, history of the Ettu, which is endemic to Hanover, and samples of the Fufu, which is the food devoured at Ettu sessions,” Donaldson shared.

She said that the association is always ready to welcome newly retired teachers, adding that the format of the monthly meeting varies from time to time so as to add variety and boost interest.

Meanwhile, Christeen Hooper-Johnson, a 38-year veteran who is now retired, told The Gleaner that the association has been of great help to retirees who reside in the parish, as it gives them the opportunity to meet, socialise and exchange thoughts on a regular basis.

“Tuesday’s meeting was very entertaining and interesting. It (meetings) keeps us going. Instead of us sitting down at home and doing nothing, it keeps our minds active,” she stated, pointing out that all the retirees are still paid-up members of the Jamaica Teachers’ Association and that two new members joined the association on Tuesday.