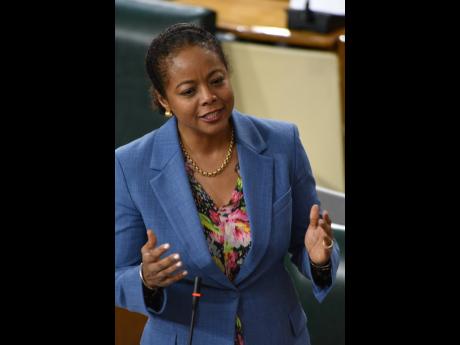 Ian Allen/Photographer
Marlene Malahoo Forte, minister of legal and constitutional affairs, addresses a sitting of the House of Representatives.

Following a submission to Cabinet in June, legislative teams have been established across ministries to address the slow pace of legal reform in the public sector.

Minister of Legal and Constitutional Affairs Marlene Malahoo Forte explained that the legislative review process has been affected by delays, culminating in critical pieces of legislation neither being amended, repealed and replaced, nor developed and subsequently passed in a timely manner.

“Over the years, it has been observed that after the Throne Speech has been delivered, there is usually delay in some ministries sending the necessary instructions. The Office of the Parliamentary Counsel (OPC) is particularly affected by the current situation because it is at the end of the legislative production chain,” she said during Tuesday’s sitting of the House of Representatives.

Ten issues affecting the legislative process were identified in September 2020, one of which was the tardiness of ministries in responding to final draft bills forwarded to them by the OPC.

Malahoo Forte said an inaugural meeting with the legislative teams was convened in September to enable the ministry to meet the respective officers and provide details on the new arrangements.

Further, her ministry has held meetings with the permanent secretary and the legislative team of four ministries so far to review the progress of priority laws encompassed in the 2022-2023 legislation programme and the Throne Speech, discuss strategies to accelerate the pace of reform for outstanding legislation, and discuss priorities for 2023-2024.

She noted that these meetings commenced in November and are scheduled to be completed by year end.

“A projectised approach has been introduced, which now requires all ministries to work within settled time frames. An agile, hand-holding approach has also been adopted by my ministry to ensure that support to the ministries is responsive and effective.”

The minister outlined that legislative policy development has been identified as one of the major weaknesses and her ministry is seeking to introduce a training programme to build the capacity of officers in this area.

It is projected that this training course will be implemented by the first quarter of the 2023-2024 financial year.

Of the remaining 21, she said the OPC has drafted 19 instruments that are at various stages of the legislative process.

Going forward, Malahoo Forte said a realistic legislative programme must be crafted each year, taking into account the capacity of some ministries and the heavy demands placed on the Ministry of Legal and Constitutional Affairs.