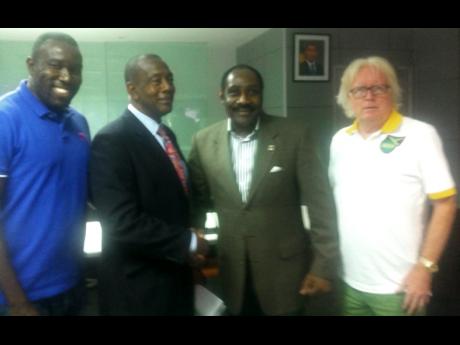 Reggae Boyz head coach, Winfried 'Winnie' Schäfer, is promising that Jamaica will be at full strength when the nation hosts the eight-team 2014 Caribbean Cup final phase, which will be played in Montego Bay from November 9-18.

"We will have a chance to select our best team because the tournament will be played on FIFA dates," said Schäfer, who was speaking at a joint Jamaica Football Federation (JFF)/St James Parish Council press conference where details of the regional tournament and next year's CONCACAF men?s Under-20 tournament ? which will also be played in Montego Bay.

"There is no guarantee for success ... we have to work hard ... all the players, both local and overseas, will have to be ready to give of their best," continued Schäfer. "Everybody wants to win against us so we must put out a strong team and play well."

In explaining the significance of the Caribbean Cup to Jamaica's quest to consolidate a position of power in regional football, JFF boss, Captain Horace Burrell, said in addition to the prestigious CONCACAF Gold Cup, the winner will also qualify for the South American Cup, which will be played in the United States in 2016.

"The top-four teams will qualify for the 2015 CONCACAF Gold Cup automatically, while the fifth-placed team will play-off against the fifth-placed team from the 2014 Copa Centroamerica tournament," said Burrell. "Additionally, the winner of the Caribbean Cup will advance to the Copa America Centenario Cup in 2016."

"We are ready to host this tournament and we are promising the highest level of hospitality," said Montego Bay?s Mayor, Councillor Glendon Harris, who is chairman of the local organising committee.

"The hotels, the transportation sector and the other support services are on board as we intend to give our visitors a wonderful experience here in the west."

Regarding the 12-team CONCACAF Men's Under-20, which will be played between January 9-24 next year, Burrell said for the first round there will be two zones of six teams each. One zone will be played in Kingston and the other in Montego Bay.

"At the conclusion of the zonal stage, the two semi-final qualifiers from the Kingston zone will join the two qualifiers from Montego Bay in the play-off to qualify for the finals", said Burrell. "The final will be played here in Montego Bay."