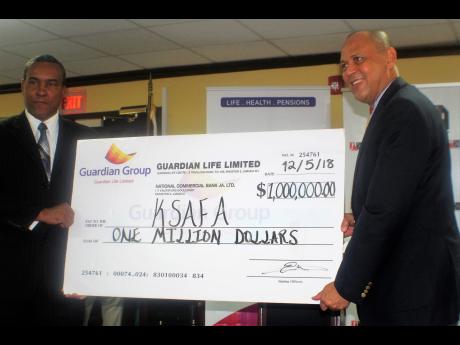 Contributed
Kingston and St Andrew Football Association (KSAFA) president Wayne Shaw (left) receives a symbolic cheque from Eric Hosin, chief executive officer of Guardian Life Limited, for sponsorship of the third staging of the KSAFA under-10 football competition. The handover was done at the launch of the competition at the Guardian Group headquarters on Trafalgar Road, St Andrew, on Thursday.

The third edition of the Guardian Group/Kingston and St Andrew Football Association (KSAFA) under-10 football competition received a major boost thanks to a $500,000 sponsorship from Phoenix Academy founder Craig Butler.

The contribution will go towards ensuring that all 31 participating teams will be outfitted for the two days of competition at the Football Factory in Barbican, St Andrew. The competition received $1 million dollars from title sponsors Guardian Group.

KSAFA president Wayne Shaw said at the tournament's launch at the Guardian Group's head office on Trafalgar Road, St Andrew, on Thursday, that he was pleased to see more teams getting youngsters involved at an early age.

"We welcome this contribution from Mr Butler. He says he is a product of KSAFA, and this is his way of giving back, and we are very grateful. We really appreciate it," Shaw told The Gleaner.

"We saw the need to make changes to our youth calendar, and this addition to our age group development programme continues to be well received. We had 16 teams in April, 25 in August, and 31 in December, so it's growing and can only benefit football on a larger scale.

"KSAFA recognised the need to put major emphasis on youth football, and as such, we are making all efforts to have corporate Jamaica see the need to support, and we have garnered the support of Guardian Group and Tastee," he said.

The format of the competition, which takes place on December 15 and 16, will see 31 teams divided into eight groups. There will be seven groups with four teams and one group with three teams. The top two teams from each group will advance to the quarterfinals.

Meanwhile, president of Guardian Life, Eric Hosin, believes that the tournament will benefit Jamaica massively in the future. "This year, we have spent $3 million on the three tournaments, and we are pleased to see an increase in the teams. There are teams from St Catherine and Manchester, so it is spreading out of town, and the game is being developed," he commented.

"Football around the world has developed a certain way, and the countries that have done well are the ones that started to develop players from a very young age. We can't wait until they are 15 and 16 years old. So this will be a long-term effort, and it will bring great benefit to Jamaica's football in the long term. So as a company, we see this as a major contribution as it allows the youngsters to play as a team in a competitive environment," he said.