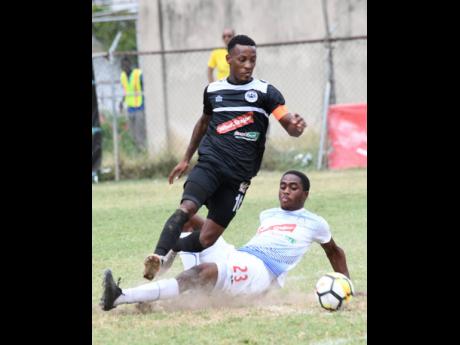 Cavalier captain Chevonne Marsh, a key component of the team’s MHM (Marshall, Hamilton, Marsh) attacking combination, said that the relationship among the three attackers goes far beyond the field of play and that it is something they developed when they were youngsters.

Marsh also strongly believes that the trident will have to turn up with their ‘A’ game in their Red Stripe Premier League semi-final assignment against Waterhouse if the team is to have a chance of advancing to their first Premier League final since 1981.

“I think we are the most dangerous front three in the Premier League,” said Marsh. “We give people something to come out and see, because this front three is so exciting.

“It’s me, the captain, and two vice-captains. We are the persons the team look up to, come out and lift this team. We give them something to fight for, and that is what this team has been doing. But this is a relationship we (MHM) have built over the years. It is not something that happened by accident; it is something that we have built from we were youths coming up, and it’s working well now,” he continued.

“But we have to give credit to the entire team and coaching staff. It’s not just the trident; you have to give the squad full credit,” he added.

Nevertheless, he believes that it is important for the front three to put in a good performance if they are to beat one of the league’s most consistent teams.

“It’s important. (for MHM to put in a good performance) because we are going up against a team that has been dominating the local Premier League, they are an experienced squad. We have quite a few players who are not so experienced, and as the captain, I have to keep the team focused and keep the discipline, but I’m confident we can get the job done. We (MHM) are skilful. We are like Neymar, Messi and Suarez, we are the reflection of that,” he stated.

Cavalier lost out at this same stage last season, and Marsh believes that they are more than capable of taking that next step.

“Based on the calibre of players we have, I strongly believe we can take it a notch further this season to do better than we finished last season and win the league. I’m confident knowing this is a young, spicy and exciting team, and I believe we can get the job done, but I want to take it game by game because every game is different, and you have to approach it different,” he said.

Cavalier front three are responsible for 25 of the team’s 41 goals, with Marshall and Hamilton netting 10 each, while Marsh has netted five. All three scored in the 3-0 first-leg semi-final win against Arnett Gardens.