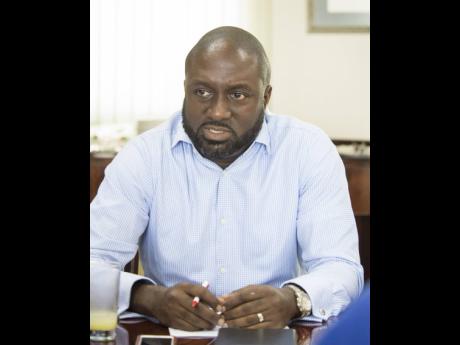 Acting president of Tennis Jamaica (TJ), Aswad Morgan, says plans are at an advanced stage for the creation of a $100-million national tennis centre, and is calling for greater support and unity within the local fraternity.

Morgan, who could be challenged at the organisation’s April 30 annual general meeting (AGM), set for the Jamaica Olympic Association offices, also addressed concerns surrounding the voting process for the upcoming elections.

The long-standing TJ official and former vice-president was elevated to the top job within the body after former president John Bailey’s surprise resignation in December 2017.

He will be seeking his own mandate at the coming AGM and has listed the promised eight-court tennis facility, the appointment of a technical director for the national programme, and an improved administrative structure as his main areas of focus.

Morgan, who yesterday told The Gleaner that there have been advanced discussions with the International Tennis Federation (ITF), as well as the local sports and tourism ministries, is expecting to provide further details on the facility in the coming weeks and believes it will have a major impact on the sport in Jamaica.

“We have a headquarters, but we are very limited in what we can do,” Morgan said in reference to TJ’s base at the Eric Bell Tennis Centre on Piccadilly Road in Kingston. “We have only four courts, and most international tournaments require six (courts), and some push it to eight.

“We are very close. We are in an advanced stage of negotiations. We are very close to signing with an entity to set up what we consider to be a world-class national tennis centre,” Morgan continued. “It’s at a very delicate stage, but I can tell you that we have tried for many administrations and it hasn’t come to fruition, I am hell-bent on making it happen and we have not got nearly this close.”

He noted that the facility is set to feature eight courts – including two clay courts – classrooms, gym facilities, among other features.

Morgan also pointed to the recent ITF Level One certification of seven local coaches, a programme, that will also see coaches Joel Jones and Tinesta Rowe travel to Valencia, Spain, for additional training and certification. The administrator added that TJ is looking to appoint a technical director in the near future.

However, with the AGM approaching, there are concerns among some members of the organisation, surrounding an AGM notice that was sent by Tennis Jamaica’s honorary secretary, Leroy Brown, on April 5, 2019, outlining that in order for members to vote or be eligible to stand for election, membership dues must be paid up by this Friday, April 12.

ISSUE WITH DEADLINE for DUES

At least one member has expressed an issue with the establishment of a deadline for the payment of dues, arguing that the cash-strapped organisation should allow more time as some members might not be able to find the dues in time and that this might affect the results of the elections.

Morgan, however, rebutted that this adjustment was simply made to ensure greater organisation.

“Three years ago when we had the very controversial elections, a part of the problem at that point was that we didn’t have a time frame for nominations and we had a situation where people would show up on the (election) night and pay for membership and so on. It became an administrative nightmare. In past AGM nights, if 20-25 persons came, we would be lucky, 77 persons showed up that night, so you can imagine. We have now put a mechanism in place for better planning and preparation,” said Morgan. “Persons knew from January that they should come in and pay. Dues are due on January 1. If someone is alluding that there is some sort of gamesmanship, that’s not so.”

“You will always have your critics, but what I like to hear is constructive criticism. We want to make a call to the tennis loving fraternity, who figure they have the time, brainpower, the heart to bring back tennis to where it was before and beyond, to come in and help,” he encouraged.