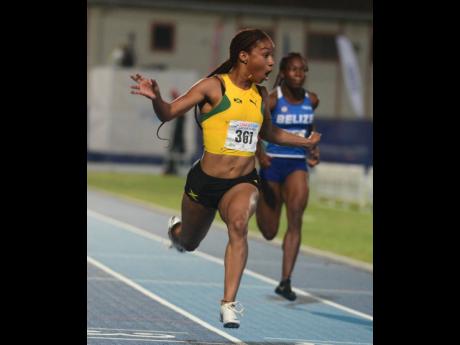 The world junior champion received 14 of the 19 votes for the top honour. The other number-one votes went to Valor Christian High School’s Anna Hall, who finished second in the voting, and Chloe Cunliff of West Seattle High School in Washington, who was third.

Williams says that she is honoured by the accolade.

“It’s an honour to be named the Track and Field News High School Athlete of the year,” she said. “A lot of amazing athletes have gotten this title, and to be named amongst them is humbling and exciting for me. I guess they’ve seen all the hard work I’ve put in for last season, which had its high and lows, so this is special.”

The publication said, however, that Williams was downgraded on more than one ballot because of her adverse analytical finding this summer, and additionally, because she did not represent her high school in official competition this year.

The award comes as a silver lining to what her coach, Ato Boldon, has described as a rough end to her season. Williams tested positive for the banned diuretic hydrochlorothiazide after the National Senior Trials in June. She was given an official reprimand with no period of ineligibility by the Independent Anti-Doping Disciplinary Panel after her hearing in late September after establishing no significant fault on the part of the sprinter. She was provisionally selected for Jamaica’s team to the 17th IAAF World Championships in Doha, Qatar, from September 27 to October 6 but withdrew from the women’s 4x100m relay team pool to avoid possible in-fighting regarding her presence. She was also withdrawn from the women’s 100m event, with Jonielle Smith selected as her replacement.

Despite all this, she had multiple highlights this year, including her performance at the 2019 Carfita Games, winning the 100m, 200m, and 4x100m titles. Her achievements won her the Games’ Austin Sealy award for 2019, becoming the first Jamaican to win the award back to back since Usain Bolt in 2003 and 2004.

She also captured the 100m gold and silver in the 4x100m relay at the Under-20 Pan American Championships in San José, Costa Rica.