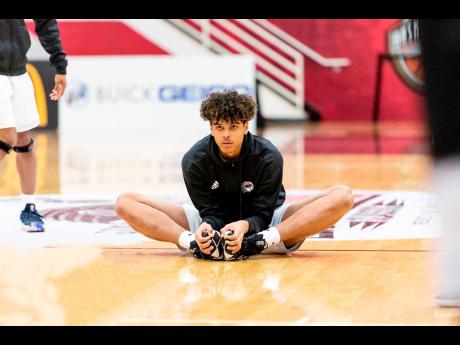 Jamaican basketballer Lawrence Foreman has taken a monumental step in his promising career. The 18-year-old centre has committed to NCAA Division One School Rider University in New Jersey for 2020. The former Jamaica College standout says that the scholarship validates the hard work he put in towards this moment.

“When the offers and interests started coming in, it was towards the end of this year. I have been constantly working hard for the past three years, so when I was seeing that it was finally starting to pay off, I just got a sense of relief for the most part,” Foreman told The Gleaner.

Foreman said that the close family-like atmosphere convinced him to make Rider University his home.

“When I took my official visit, the coaching staff, they are just so close to the players, and I like how they set up their academic point of view, too. How they work together with the professors. When I saw how much of a family they were at Rider, I said that this is the place I want to be,” Foreman said.

He was rising through the youth ranks as a talented chess player, winning various regional tournaments. But he also discovered a love for basketball, and when training for both started to clash, he had to make a choice.

“The training (for chess and basketball) started clashing. So my parents sat me down and said that I had to decide [on] one and just focus on that one, and become really good in that one,” he said. “My love for basketball was developing at the time, so I decided to just go through with basketball.”

The transition from chess to basketball was far from easy. He has battled health issues, including chronic asthma and weight problems, which left him behind the other kids in fitness and conditioning.

“When I first started playing basketball, I had a weight issue. I was bigger than everybody else in weight and height. I was slow, I got winded easily. So I had to work twice as hard to get my fitness up to keep up with everybody else on the court. And it took me a long time to really get over that [hurdle],” Foreman said.

It was under the guidance of Jamaica College head coach Duane Cunningham that he saw his game and confidence increase.

“He believed in me when other people in Jamaica didn’t think I could do it and make the transition to the international level and go to school abroad,” Foreman shared.

The opportunity came in 2016 when he moved to the United States to St Thomas Moore School in Connecticut, and later to Windsor High School where his technical improvement and success caused college scouts to take notice.

“(Windsor) coach Ken Smith took me in with open arms and did a lot of one-on-one work with me in certain skills I had to fine-tune, and that also helped me transition to appeal to college schools more. He also provided me with a lot of exposure where we made it to the State Championship, playing in front of 8,000 to 10,000 people, so that got my name out there and created the buzz that I needed,” he shared.

Foreman is spending his post-graduate year at the Woodstock Academy in Connecticut and he is already aiming towards the NBA. But he hopes his story will be able to inspire others to chase their dreams. He also has plans of his own to contribute back home.

“I definitely have aspirations of going pro. That’s the ultimate goal for me. Once you are locked in, just work. Don’t listen to any of the hate [and] you will achieve the goal. If you make the leap to college, you cannot get complacent. You have to keep on going, keep on pushing. I hope that everyone that makes it comes back and gives back because that’s what I want to do,” he said.