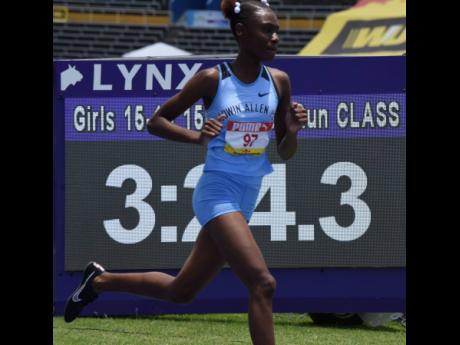 Jamaica’s athletes continued from where they left off on Friday with another dominating performance on Saturday’s morning session of the North American, Central American and Caribbean Athletic Association (NACAC) Under-18 and Under-23 Championships in San Jose, Costa Rica.

In the Under-23 Girls event, Daszay Freeman, the only Jamaican in the field, won the gold medal in 13.80s as the Bahamas duo of Charisma Taylor 13.88s and Sasha Wells 13.94s took second and third, respectively.

Andre Harris captured the gold medal for Jamaica in the Under-18 Boys 110m hurdles, winning in 13.78s while his teammate Shamar Blake took the bronze in 14.08s. Otto Laing of the Bahamas took the silver in 13.82s.

Jamaica also captured both 800m titles and quinellas in the Under-18 category. Rickeisha Simms won the Girls event in 2:23.75 minutes, ahead of Kishay Rowe who was second in 2:23.91 minutes.

Kemarrio Bygrave took the Boys title in 1:53.35 minutes, ahead of Adrian Nethersole, second in 1:56.63 minutes.

In the only field events final in the morning session involving Jamaican athletes, Serena Cole, who was second in the Under-18 Girls’ 100m on Friday, returned to capture the long jump title with a distance of 5.72m.