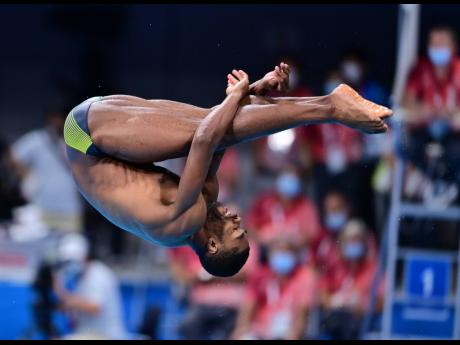 Gladstone Taylor
Yona Knight-Wisdom competing in the men’s three-metre springboard diving at the Tokyo 2020 Olympic Games inside the Tokyo Aquatic Centre in Japan on Monday.

Aquatic Sports Association of Jamaica (ASAJ) President Martin Lyn, while unhappy at diver Yona Knight-Wisdom’s failure to make the men’s three-metre springboard final at the 2020 Tokyo Olympic Games, says that there is still optimism for the sport’s future.

Knight-Wisdom, who is a two-time Olympian, advanced from the preliminary stage on Monday. However, he finished the semi-finals yesterday in 15th place with 362.95 points, missing out on a place in the final, having not made the top 12.

While applauding the effort made in his latest campaign, Lyn said he had hoped that Knight-Wisdom would have been able to produce a much better performance, given that be had the experience in Rio 2016 to draw from.

“I’m disappointed because the score that he made is not near his best. He has certainly done a lot better than that,” Lyn told The Gleaner.

“After the fact, we can always say what should have happened or what shouldn’t have happened. But after dive three, when he saw his position in the table, I think that that might have affected him as well, and that was something that I was hoping that he would have been able to overcome, because I know that kind of shut him out in Rio 2016 as well. But he made it to the semi-finals. He is still one of the top divers in the world, so we just have to see where we go from here,” Lyn noted.

China eventually finished one-two on the podium with Siyi Xie winning gold in the final with 558.75 points and Zongyuan Wang taking the silver with 534.90 points. Great Britain’s Jack Laugher finished third for the bronze with 518 points.

Rio 2016 was Knight-Wisdom’s debut Olympics, where he finished in 14th place with 381.40 points, a place higher than he finished this time around in Tokyo. However, Knight-Wisdom said that he is not deterred and is also committed to ensuring a pipeline of talented divers from Jamaica to challenge the world stage consistently.

In a social media post after the competition, Knight-Wisdom said that he is already turning his attention towards the upcoming Commonwealth Games, as well as targeting a third straight Olympic appearance in 2024 in Paris.

It is a goal that Lyn said the ASAJ is also working towards, in collaboration with the Jamaica Olympic Association (JOA), and their initiative for more participation in water sports for the 2024 Games. Lyn said that Knight-Wisdom’s continued impact on the international stage has set the platform for more recruitment locally and internationally.

“We have been in constant communication with the JOA. In fact, we are working together with the JOA, and that is one of the reasons why recently they announced much more push in water sports activities,” Lyn said. “There are many positives about Yona, but one in particular is that because he has put Jamaica on the map for diving, we have had a few inquiries from other interested divers to represent Jamaica. That definitely is something that Yona can take credit for and will do.”