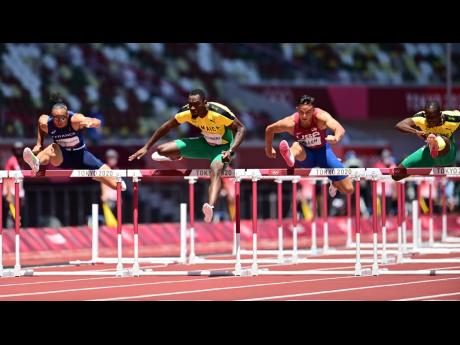 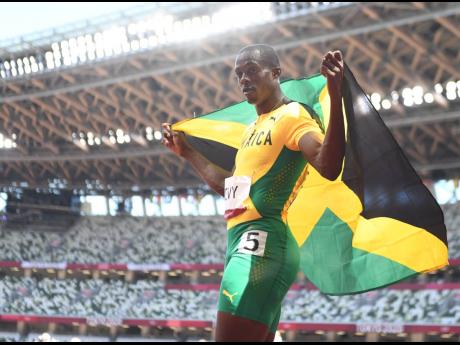 TOKYO, Japan: Newly crowned Olympic 110m hurdles champion Hansle Parchment crossed the line after his semi-final at the Tokyo 2020 Olympic Games with a knowing smile. He had seen enough from trailing the gold medal favourite, Grant Holloway, to the...

Newly crowned Olympic 110m hurdles champion Hansle Parchment crossed the line after his semi-final at the Tokyo 2020 Olympic Games with a knowing smile.

He had seen enough from trailing the gold medal favourite, Grant Holloway, to the line. He knew what he needed to do to get the better of the big American and hand him his first defeat in just about a year.

A discussion with Jamaican sprinters Tyquendo Tracey and Julian Forte helped him to bolster his attack and make the necessary tweaks ahead of yesterday’s final at the Tokyo Olympic Stadium.

The result was a strong start — from a man infamous for poor starts - and a powerful assault over the final three hurdles, which saw the Jamaican medal magnet take the win in 13.04 seconds as Holloway, 13.09s, held off a fast-finishing Ronald Levy, 13.10s, in the race for silver and bronze.

It was Jamaica’s sixth and seventh medals at the Tokyo Games.

“Well as you can see, I’m composed, happy of course, elated. It’s been a long time coming. It’s been a lot of hard work, keeping the focus, keeping the tunnel vision and putting the right race together,” Parchment, who had to overcome a season of setbacks to fight his way to the podium, said.

Parchment’s win ensures that the 100m hurdles Olympic gold medal remains around the neck of a Jamaican following Omar McLeod’s triumph at the 2016 Rio Olympic Games.

McLeod was not selected for this team, after finishing out of the qualifying spots at the National Senior Championships in June, leading to strong debate around whether he should have been named to the team.

He was however congratulatory of the duo on social media.

Parchment, who praised the strength of Jamaica’s sprint hurdling programme, said his performance and that of Levy and Damion Thomas, who made the semi-finals, shows that the right decision was made by the Jamaica Athletics Administrative Association’s selection committee.

“I would say that,” he said. “I didn’t have any doubts. Of course I didn’t know what would have happened, but I was relaxed about the whole situation. I would have loved to have all the best hurdlers here. I would have loved to maybe get a one-two-three, but we can do that another time. You know, it was also a good experience for Damion. I think he did pretty well. He’s young and has a lot more years in front of him. I expect to see a lot more from him.”