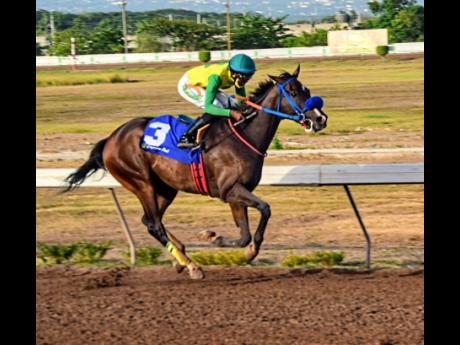 IT’S hard to back a filly to beat SHE’S A WONDER in the Oaks after twice placing against the best colts and geldings, first finishing second in December’s Jamaica Two-Year-Old Stakes and a gallant third as a three-year-old in the 10-furlong St Leger a month ago.

In contrast, SHE’S A WONDER’s stablemate, BIG JULE, the least experienced of the Jamaica Derby lot, with only three runs under his girth, could very well be a banker in disguise as Ian Parsard aims at an Oaks-Derby sweep.

Imported in utero, the rangy Tapizar-Blues In the Grass colt is built for the 12 furlongs of the derby. His long strides carried him to an 18-length victory at nine furlongs and 25 yards on June 21, opening up 18 lengths on non-winners of two races from the half-mile marker to the winning post.

Winning margins can be overrated, but BIG JULE’s 1:57.4, running into a headwind, was only two-fifths of a second shy of the 1:57.2 posted by ONEOFAKIND 16 days earlier, making it the third-fastest clocked at the trip after the surface was resanded, putting an end to the crazy times being recorded at the back end of last season – even though SENTIENT’s 1:56.0, January 30, also appeared to be a bit on the fast side.

However, an injury, and further setback, following that runaway victory, dashed Parsard’s hopes of having BIG JULE show his class again at nine furlongs and 25 yards in what should have been his derby prep, forcing a hurried but quietly impressive preparation for Saturday’s big day.

“We have had to work him twice per week as opposed to once. Two weekends ago, he galloped six furlongs with DOUBLE CROWN in 1:17.0. The following Wednesday, we asked him to pace from the winning post. He did a nine-furlong pace work in about 2:08.0,” Parsard said late Wednesday evening.

“He came back on Saturday, galloped a mile and finished the last seven furlongs in 1:32 and change, which was okay. I wanted a little more from the work, but the jockey was not unhappy. I wasn’t over the moon because the gallop out wasn’t good. However, speaking with Omar (Walker), he said the horse knows when the game is over once he passes the winning post.”

Parsard has every reason to be quietly pleased with BIG JULE’s comeback and his chances against a distance-suspect bunch, which CALCULUS exposed when he came off the bench to beat them by nearly seven lengths in the 10-furlong St Leger.

Last Saturday, DOUBLE CROWN clocked a good 1:40.0 for a mile, carrying topweight 126lb, for a six-length victory, six days after galloping 1:18.4 and losing that workout to BIG JULE’s 1:17.2. Using DOUBLE CROWN as an exercise marker, a sound BIG JULE should be a nightmare for his derby rivals.

“He passed the vet check, so I am sure he is over soundness issue. Even at 80 per cent, he has a good shot at the derby,” he surmised.

Still, Parsard believes Gary Subratie’s CALCULUS, who easily won the St Leger, is the horse to beat on paper.

“I think the horse to beat is CALCULUS, not because he won the St Leger, but more so because of all the horses prepping for the race, he seems to have had an uninterrupted path. For that reason, I would say he’s the horse to beat.”

CALCULUS has looked in great shape at exercise. The derby distance will suit his running style but BIG JULE appears more than his match. FURTHER AND BEYOND has looked his usual flashy self in the mornings but remains as suspect as ever in excess of a mile.