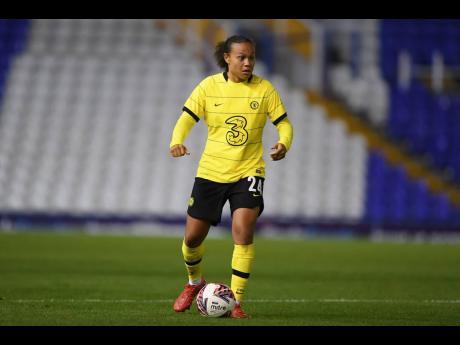 In her first national senior women’s camp, English-born midfielder Drew Spence says she is leaning on her maturity and evolution as a player to help guide the team in their quest for back-to-back World Cup Finals appearances.

In Spence, 29, Jamaica has a midfielder who has played 13 years in the FA Women’s Super League, all with reigning champions Chelsea. She says that the experience, as well as her personal growth, will be a major asset in handling high-stress situations similar to what the team will face when the World Cup qualifiers begin next February.

“I’ve been a part of a team that has won a lot of trophies and we have played in so many big games and high-stress moments so I know how to handle that now. And I know international football is another step up, but I have played in the Champions League, which is a high-quality standard as well,” Spence told The Sunday Gleaner.

“My experience and hopefully my leadership on the pitch (will help). I am older now. I’ve had a lot of time to really grow as a player and I just really want to do the best I can for the Girlz,” she added.

She has started on the right foot, as her 81st-minute penalty helped to give Jamaica a 1-0 win over Costa Rica in their closed-door scrimmage on Thursday. Spence was pleased with how welcoming her new teammates have been in camp and felt she made the right choice to switch allegiances, bringing full circle a recruiting process that started in the early goings of the COVID-19 pandemic last year.

“Coach (Hubert) Busby reached out to me. He said that he wanted to come in for a camp and we had a conversation and told me a lot about the organisation and how they have been to the World Cup and what are their plans going forward,” Spence said. “I want to play international football and I think it was a great opportunity for me. I want to learn more about my culture, represent my family.”

It was a decision that was celebrated in particular by her father, whose side of the family is Jamaican.

With a potential international debut imminent this afternoon, Spence says that she is just focused on helping Jamaica get their second win of the calendar year.

“You are always nervous about the first game. And soon as I step on the pitch and get the first 10 minutes out of the way, I think all nerves will be gone and then I’ve just got to start to enjoy it and do the best I can to make sure we get that win,” Spence said.