St Mary to face JDF in JCA 50-over final 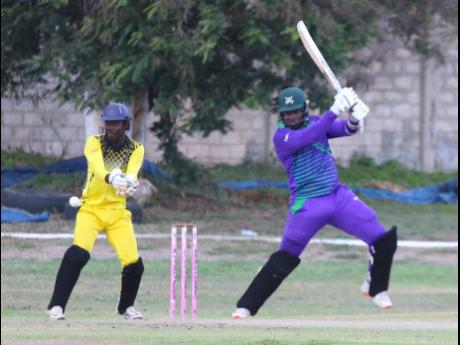 Defending champions St Mary will get another chance to retain the Jamaica Cricket Association 50-over title following a narrow eight-run semi-final victory over Kensington Cricket Club on Saturday.

St Mary will face the Jamaica Defence Force in the final. The army men got by Kingston Cricket Club by three wickets in the other semi-final which was played at Up Park Camp.

At Kensington Park, the home side won the toss and decided to field, and that decision looked the wrong one after the St Mary openers Alwyn Williams and Orlando Lyons put on 107 runs for the first wicket.

It took skipper Ryan Francis with his left-arm spin to break the partnership when he had Williams caught by Nicholson Gordon for 73 off 67 balls. The national left-hander had hit eight fours and two sixes in his swift knock.

Lyons and Tyrone Daley kept the scoreboard ticking over but Daley would also fall to Francis for 32 to leave the St Mary team on 132 for two.

Sheldon Pryce and wicket-keeper Anthony Walters both got into the twenties to help push the visitors over the 200 mark, but a couple of run-outs and some good death bowling from Daniel Griffith kept St Mary to 238 all out in 47.1 overs.

Griffith finished with three wickets for 17 runs while Francis bagged three for 29. Delbert Gayle chipped in with two for 37.

In reply, Kensington got a brilliant start from National opener Leroy Lugg and Francis, with the pair adding 76 runs for the first wicket.

Francis was the first to go, caught behind for six off medium-pacer Alwyn Williams.

Lugg continued to play aggressively and blasted his way to a fine 111 from just 60 balls with 14 fours and six sixes.

When Lugg became the fourth wicket to fall with the score on 158, the remaining Kensington batters could not maintain the momentum, but in the end came agonisingly close to fall short by eight runs. Young Alex Hinds chipped in with 20, as pacer Jermaine Chisholm bagged four for 30 and Sheldon Pryce took three for 31.

Over at Up Park Camp, the army men also sent their opponents Kingston in to take the first strike, and the Tigers posted 267 all out in 49.1 overs. Former National player Garth Garvey top scored with 74, while opener Geordae Seymour made 49.

National fast bowler Gordon Bryan bagged four for 52 while there were two wickets each for Leighton Leslie and Andre Dennis.

In reply, the JDF had opener Tevin Gilzene to thank for their successful run chase, as he hit an unbeaten 131 from 157 balls to see them home. Gilzene hit five fours and seven sixes, as the army men replied with 268 for seven. Everton O’Haro took three for 44 for Kingston.