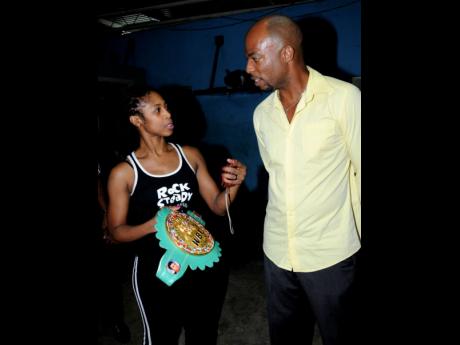 PRESIDENT OF the Jamaica Boxing Association (JBA), Stephen ‘Bomber’ Jones, is thrilled following news that 13 boxing trainees completed their one-month intensive course and graduated from G.C. Foster College on Tuesday and are now eager and raring to put that which was taught into practice.

“Right around, on behalf of the whole boxing association and boxing board, it’s very pleasing, because we have discussions often about the trajectory of the sport, where we look at where we’re coming from and where we want to get to. The good thing is, with the sport being so popular at all levels, from the grassroot to the pro level, it’s incumbent that we get as much activities as possible,” said Jones.

Jones, who is in his fourth consecutive term as president of the boxing association, believes the timing of the graduates fits perfectly into what he’s expecting to be a very active 2023 season on local soil.

“With 13 new graduates coming in, that fits in well with where we want to get to for an active 2023 and beyond. The more you do something, the better you should get at it, so the officials will have more and more practice and understand what to look for and it will help push the sport much further,” he said.

Still, Jones does have some areas of concern, a presence for the sport in high schools being chief among them.

“The only area that I would love to see more activity is in schools. I would love to have a high-school boxing championship. We’ve been having conversations with schools that are interested so we are trying to get as many schools as possible. I think, once we get to the schools, it will be right throughout the island.

“I think next year we will have boxing in schools, definitely in terms of the development part of it. Once we have that, then we will start off our high-school championships, so we’re closer than we’ve been in a while,” he said.

“Definitely, the idea is to have Jamaica as the hub for boxing, where the talents that we have can actually build a career. We have a good cadre of amateur boxers coming up, and the only way we can offer that is if they believe they can build a career from here. The only thing that’s blocking us from having world champions from here is activity.”