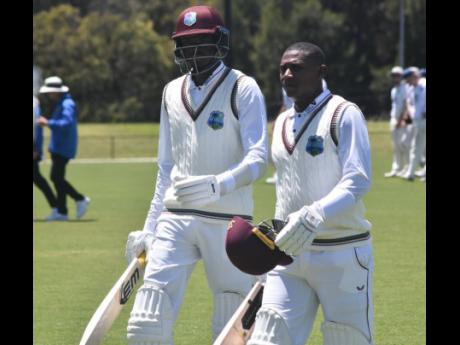 Chanderpaul’s knock came on the heels of his first-innings 119 and earned him man-of-the-match honours, most likely also sealing his Test debut in the opening Test at Perth starting next Wednesday.

West Indies appeared poised to win the day/night contest at 177 for three but lost a cluster of wickets to see their challenge derailed, finishing on 277 for eight.

“I’m not happy with the result; we should’ve won it,” head coach Phil Simmons said.

“We had a few misplaced wickets in the middle there where we were controlling the game, so that’s the only little disappointment I had about today. But the way the guys fought at the end there is very encouraging always.”

Captain Kraigg Brathwaite was an early casualty, adding only one to his overnight 19 before finding himself trapped on his crease and bowled by seamer Michael Neser (2-43).

The left-handed Chanderpaul then carried his side’s chase, stroking five fours and a six off 138 balls as he put on 46 for the second wicket with Nkrumah Bonner (12) and a further 34 for the third wicket with Thomas, whose 93-ball innings included four fours and a six.

Chanderpaul was eventually third out, left-arm seamer Joel Paris earning an lbw decision against him, but Thomas picked up the mantle, adding 58 for the fourth wicket with left-hander Kyle Mayers (20).

West Indies were eyeing victory when Mayers fell to a catch at the wicket off Neser, triggering a slide which saw the Caribbean side lose three wickets for 44 runs, the innings quickly declining to 221 for six.

The unflappable Da Silva then anchored perhaps the key stand of the innings when he posted 48 for the seventh wicket with Alzarri Joseph, whose 31 came from 73 deliveries and included four fours and a six.

Da Silva faced 124 deliveries and counted half-dozen fours in the partnership which took crucial time out of the final session and frustrated the hosts.

By the time Joseph steered pacer Mark Steketee (3-56) to gully and Kemar Roach gloved the same bowler to first slip 11 balls later without scoring, the end was already in sight and Da Silva partnered with the injured Raymon Reifer (0 not out) to keep out the last 55 deliveries of the game.