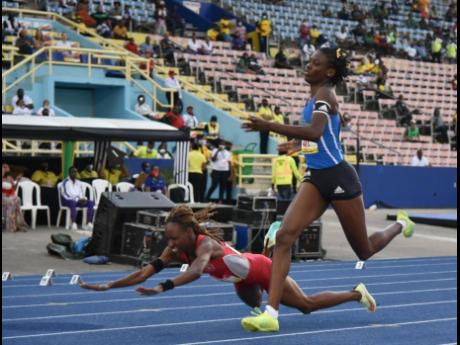 ONEIKA MCANUFF will have to be chalked up as another of Hydel High School’s super class one team to confirm this season will be her last.

McAnuff will depart for the shores of the United States next year where she will be competing for the University of Kentucky.

The announcement was made on the university’s social media pages on Tuesday.

McAnuff will be under the direction of head coach Lionnie Greene. The programme boasts alumni such as 4x100m World Championship gold medallist, Abby Steiner, who recently signed a professional contract with Puma.

McAnuff has had a strong 2022 season where she claimed the Girls’ Class One 400m hurdles title at the ISSA/GraceKennedy Boys and Girls’ Athletics Championships in April with a time of 57.68 seconds, as well as silver in the Class One 400m.

At the Carifta Games, she finished second in the 400m final and became the national Under-20 champion at the 400m hurdles.

McAnuff competed at this year’s World Under-20 Championships in Cali, Colombia, advancing to the semi-finals but failing to progress to the final with a sixth-place finish.

However, she earned a medal as part of the 4x400m team that got silver in the event.

McAnuff will be the third Hydel student to make a decision on their future after high school, with World Under-20 200m champion Brianna Lyston, who is in her freshman year at Louisiana State University doing the same earlier this year. Under-20 100m hurdles World Champion Kerrica Hill is now a member of Elite Performance Track Club, led by head coach Reynaldo Walcott.