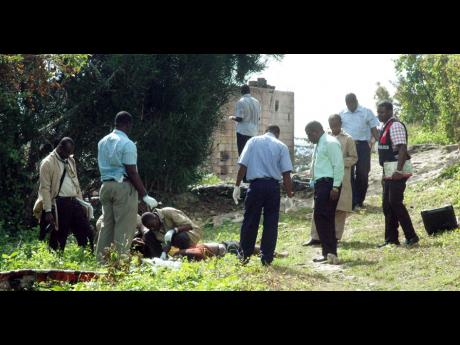 Adrian Frater
In this 2013 file photograph, crime scene investigators examine the body of 38-year-old Cecelia Coke, who received more than 30 bullet wounds during a gun attack by thugs in Salt Speing, St. James

Based on the assessment of some behavioural therapists, medical disorder could be at the heart of some of the vicious murders that have transformed sections of western Jamaica, especially Montego Bay, into a virtual killing field.

In looking back at some of the cold-blooded murders that have rocked the region over the past decade, it would seem reasonable to conclude that, in many of the over 1,000 cases, the acts were committed by persons with medical-disorder issues.

Today we will revisit The Gleaner's archive to look at some of the incidents which revealed such raw brutality that the killers had to be deemed undiagnosed psychopaths.

Below are the synopses of four such cases which occurred between 2007 and 2016.

Harris, who was a witness in a murder case, was beheaded and his head dumped in front of the Burchell Baptist Church in downtown Montego Bay, which is less than a 100 yards away from the Church Street Police Station.

• March 27, 2011 - Matthew Reid, a 16-year-old student of Cornwall College who was in the final stages of his preparation to sit eight CSEC subjects, was brutally murdered at the Centrepoint Plaza in Montego Bay.

The police reported that about 1:15 p.m., two young men chased Matthew from the Bay West Shopping Centre. He ran to the nearby Centrepoint Plaza, where he was cornered and stabbed several times in his neck, chest and back. His throat was also slashed.

• December 14, 2013 Twelve persons were brutally murdered across St James over the past week as marauding gunmen went on the rampage.

In the latest incident, 36-year-old Monique Watson of Rose Heights was shot and killed by a gunman who walked into her hairdressing parlour and shot her at point-blank range.

Those killed were identified as Tyrone Hinds, a chef; a man identified only as 'DJ Daville', and Michael Holder. A dispute over water being splashed on a woman's cellular phone reportedly sparked the incident.

Experienced crime-fighter Senior Superintendent Steve McGregor, who has worked in some of the toughest police divisions in Jamaica, has described St James as a haven for senseless killings.