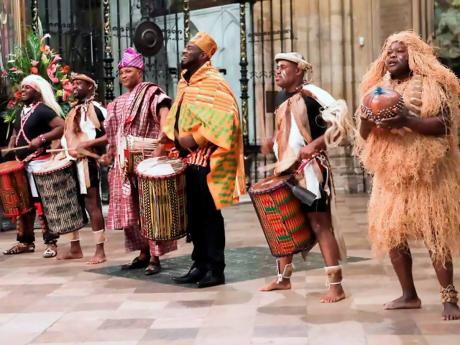 Contributed
One Drum, a collective of African master drummers and dancers, rivets the audience.

A full slate of England’s elite, headed by Queen Elizabeth, braved coronavirus fears and crammed inside London’s historic Westminster Abbey last week to witness the pounding of ancestral African drums and the melodious fanfare of a steel band to celebrate Commonwealth Day.

The Commonwealth Day service is held each year in early March, and it celebrates the association of 54 sovereign member states, including Jamaica, with a combined population of 2.4 billion people who are from the world’s largest, smallest, richest, and poorest countries.

This year, the event attracted a congregation of over 2,000. Apart from the royal family, the attendees included British Prime Minister Boris Johnson and Commonwealth Secretary General Baroness Scotland, a Dominican, alongside a glittering line-up of high commissioners, ambassadors, senior politicians, and faith leaders from across the United Kingdom.

This year’s service had a strong black presence, with dazzling performances by a line-up of multicultural talents, alongside traditional hymns with the pipe organ. The African drumming group One Drum riveted. They are a London-based collective of African master drummers, dancers, musicians, and performers emanating from the diversity of Africa’s rich ethnic traditions. And the London-based steel band called the Melodians Steel Orchestra brought warm Caribbean energy to the over-1,000-year-old Abbey, a venue that has hosted the coronation of every English and British monarch since 1066. British chart-topper Craig David also performed, to the delight of the audience, as did award-winning British black female singer Alexandra Burke with a rendition of the Motown classic Ain’t No Mountain High Enough.

Anthony Joshua, British world heavyweight boxing champion and Olympic gold medallist, read a reflection that spoke to his British and Nigerian roots, a flashback that was all the more resonant coming as it did amid fierce discussions in England about institutional racism and the marginalisation of the Windrush generation.

“I am proudly British and Nigerian, and I join a long line of UK citizens of Commonwealth origin who’ve made enormous contributions to this great multicultural society of ours,” Joshua proclaimed to thunderous applause.

Black spoken-word poet Suli Breaks also read a reflection by way of an emotive poem. Suli came to prominence in England after the release of his poem ‘Why I Hate School But Love Education’, which generated over two million online views in three days.

Prime Minister Johnson read a lesson from Luke 10:29-37, and Baroness Scotland led the Act of Affirmation to the Commonwealth. A highlight of the service was the procession of Commonwealth flags.

On a related footnote, Jamaican students up to 18 years old can participate in The Queen’s Commonwealth Essay Competition to expound on issues relating to climate change. For rules and prizes, go to www.thersc.org/competition.