Jamaica gets set to fly ahead of independence 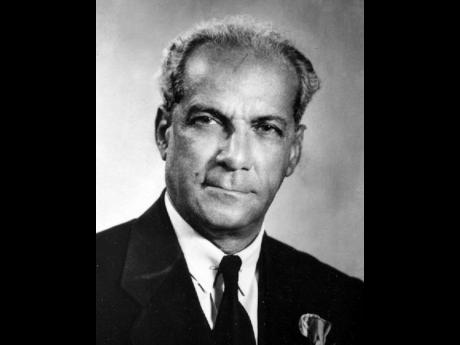 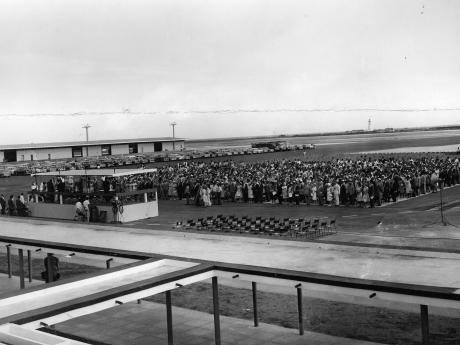 File
West Indies’ biggest and most modern airport, near Port Royal, Jamaica, which was officially declared open by Norman Manley on July 27, 1961, in the presence of more than 3,000 persons.
1
2

Vision for a greater future is something only few people think about, but it is interesting to see how the plans and actions of a generation, lead to the very normal advances another enjoys many years later. Welcome the Norman Manley International Airport.

‘We stand to be new gateway to WI’

Over 4,000 persons, including the Governor, the Federal Minister of Communications and Works, the Hon. Andrew Rose (who flew in, from the Federal capital especially for the opening), Cabinet Ministers, members of the Legislature, civil service officials, business and professional men and just ordinary folk proud of their new gateway to the Caribbean, crowded on to the airport's apron to witness the ceremonial opening.

The Premier set the Keynote of the opening, pointing to the significance of the new airport as heralding improved tourist traffic that would pass through the Eastern Caribbean.

Said Mr. Manley: “We are now equipped both here and in Montego Bay to meet our tourist problems; and we also stand ready to be the real gateway to the West Indies, because it is quite a mistake to suppose that the development of tourism in other islands of the West Indies is any disadvantage to Jamaica.”

Mr. Manley also referred to the new status of the West Indies when it became independent next year (1962), and the fact that the Federation would have the opportunity in October 1962 to negotiate a new air agreement with the United States and also Britain.

Said Mr. Manly: “I express the hope publicly that the Civil Aviation Board in America will make haste to go through the complicated business of designating an American carrier to serve the new routes because we stand ready to receive all the thousands that can pour into Jamaica and help to develop the tourist business.”

Mr. Manley said that what happened to the BWIA airline was a matter of vital concern to everybody, both from the point of view of future negotiations with the great countries upon whose goodwill in those negotiations the West Indies air future would depend.

Mr. Rose, bringing a message of encouragement and goodwill from the Prime Minister of the West Indies, Sir Grantley Adams, said that developments like the new international airport which assisted the development of Jamaica would eventually be to the benefit of the Federation as a whole.

Mr. Coombs was chairman of the function and the opening prayer and blessing of the buildings were given by the Rt. Rev. J. C. Swaby.

Mr. Coombs mainly expressed appreciation for the success of the project. He pointed out that the airport had been constructed entirely from Jamaica’s own financial resources, without any outside financial grant.

A great deal of work too, including the furniture and certain highly technical equipment, had either been designed or executed by Jamaicans, he said.  A Jamaican engineer had constructed the building which had been specially designed to meet the particular requirements of Jamaica.

“This year I anticipated that the department’s revenue surplus will be large enough to pay the interest charges on the capital invested both at Palisadoes and Montego Bay. Next year (1962), if traffic grows only at the same rate as in recent years, the surplus should cover not only the interest but should allow some capital repayment.

Mr. Paton Jones said he hoped those figures, based on the current modest charges, would give an indication that the airport was not only “a beautiful and permanent asset to Jamaica, but that its construction is fully justified by the traffic that will now use it, and that this traffic will provide sufficient revenue to start to repay the cost of the airport, not at some distant date, but in the immediate future.”

Mr. Hay said he would rather not think of the airport as a terminal or “end”, but rather as Palisadoes International Gateway, the “beginning” of a thousand new projects, the entry of understanding. To him, journeys and airports signified “the beginning of new experiences, the making of new friends, the introduction of new customs and ways of life, the first clue to another man’s point of view.”

Visitors to Jamaica, Mr. Hay said, would pass through that gateway and to them “this building will be the first Jamaican monument they see. Through it, they will pass, and through the gateways of their eyes the world will see Jamaica and learn her capabilities."