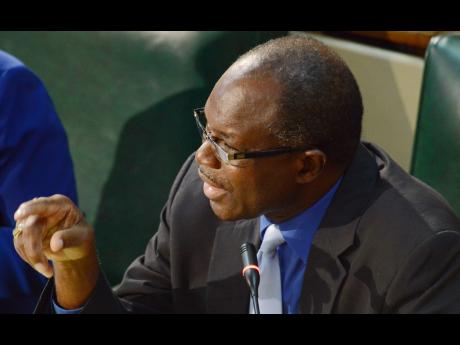 The demand issued by the committee chairman, Everald Warmington, follows an update provided yesterday by Moveta Munroe, head of the CDF Unit in the Office of the Prime Minister, on efforts to get the SDC to reduce the fee it charges to implement educational programmes.

Members of parliament (MPs) insist that the fee is limiting the number of people who can benefit from the educational assistance.

Munroe was tasked in previous meetings to set up a meeting with the SDC's executive director Dr Dwayne Vernon as part of efforts to resolve the issues. She reported yesterday that Vernon told her that it would be "pointless" to meet with him as the issue was one of policy and should go to the board of the commission.

"I don't think it is an issue that he wants to take on at all. It is just a way of just telling us from his desk 'no' but just go to the others, if they say yes, so be it," Phillips said.

Warmington, the South West St Catherine MP, accused Vernon of being "disrespectful" and said given that stance, the MPs would be demanding the monies owed to their constituencies.

"This is not a board issue. I'm not going through any board. I am very disappointed in Dr Vernon and his attitude. I think it's the height of disrespect to the members of this committee," he argued.

"At the same time, the SDC owes CDF $174 million and if this is the attitude they (SDC) are going to have, we need to demand that they pay up that money."

Phillips agreed with Warmington, adding that the matter should be referred to the Public Administration and Appropriations Committee of Parliament.

The money was accumulated because the SDC did not spend funds it received from the CDF for projects in their constituencies.

Telephone calls to Dr Vernon for a comment have gone unanswered. Earlier this month he told The Gleaner that the issue was one for the board.

The issue over the five per cent charged by the SDC to implement educational projects has been a long-standing matter.

In rejecting similar efforts in 2014 to reduce the fee, the SDC argued the level of work that is required for educational support programmes is often "intense".

PM picks former personal assistant to head CDF
MPs to preside over funds for distribution to farmers
MPs will not get money, after $6m backhoe goes out of use
Costly assistants - MPs spend $302m over four years for admin assistants
Tardy MPs could cost constituencies much-needed money