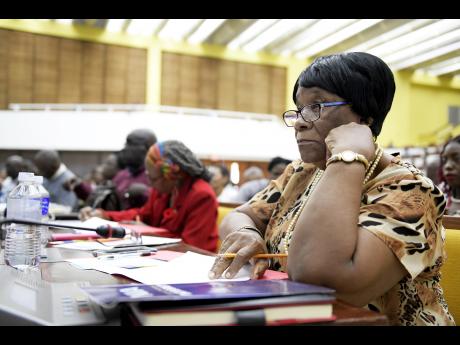 Gladstone Taylor
Justice of the Peace Beverly Hall-Taylor listens intently during the justices of the peace training session at the Jamaica Conference Centre yesterday.

Chief Justice Bryan Sykes has reiterated his commitment to create a first-world, high-tech court system in Jamaica within the next six years, and Minister of Justice Delroy Chuck has pledged the Government's commitment to do whatever it takes to make his vision a reality.

Sykes was keynote speaker at a training of justices of the peace put on by the Ministry of Justice and the National Integrity Action at the Jamaica Conference Centre in downtown Kingston yesterday.

"There are some things that can be done immediately without spending a single dollar or hiring another person. We are setting trial dates in 2019 and 2020. We are reorganising the way in which matters are set," said Sykes, as he listed a host of measures to be implemented as part of a strategic plan for the courts.

He said the drive will continue to reduce the length of time for probate and divorce matters, as well as minimise the time the courts spend putting off matters due to minor issues.

According to Sykes, attention will also be placed on more rigorous case management, increasing hearing date certainty and reducing delays.

"The legal system here in Jamaica has to be the best in the Caribbean in the next three years, both quantitatively and qualitatively; and also one of the best in the world," he said to applause.

In endorsing Sykes' vision, Chuck said the government will be pulling out all hindrances to ensure it is achieved.

"We intend that all the courts should not only be first-class facilities but also five-star facilities," added Chuck.