Bernard Lodge political game - Vaz: PNP opposing because it will lose control of Portmore; Jackson: No political consideration in concerns 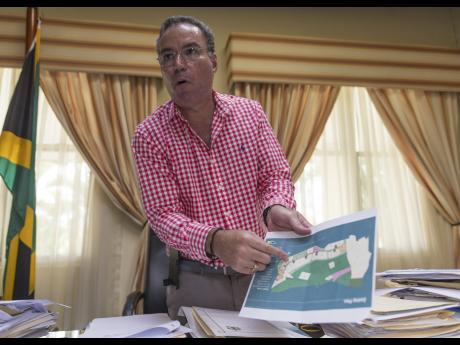 Gladstone Taylor
Minister without portfolio in the Office of the Prime Minister Daryl Vaz showing the plan for the proposed development of the Bernard Lodge land. 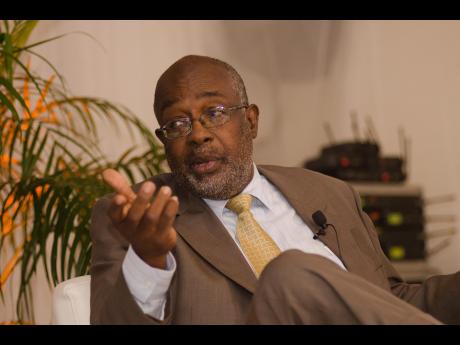 Member of Parliament for South St Catherine Fitz Jackson has rejected claims that the People's National Party (PNP) is against the planned creation of a new city on the Bernard Lodge lands because it fears it will lose the political dominance that it has traditionally had in Portmore.

Jackson's comment came days after the Cabinet minister responsible for the development, Daryl Vaz, told The Sunday Gleaner that he was determined to get the project done despite the position of the PNP.

"It is absolutely a fear of losing control of Portmore that they have controlled for so long," said Vaz.

"And the truth is that they need to look at the bigger picture rather than the parochial politics," added Vaz.

"We were elected with a mandate of economic growth and job creation and we are doing that, not only in certain parishes, but across the entire Jamaica," added Vaz.

In his response, Jackson declared that the notion that the Opposition's stance on the proposed new township is based on any political consideration is ridiculous.

"The fact of the matter is that each new housing scheme doesn't have any voter impact for at least 10 years after the scheme is built. That is a historic trend throughout Greater Portmore that I can speak of," said the veteran member of parliament.

"It is of no value politically for me, or the People's National Party. And 10 years is a long time that it takes to establish any voter preference in a particular area," added Jackson, as he declared that his concern is for the orderly development of the communities in Portmore, both for the existing residents and those who will come as a result of any new housing developments.

"It is against this background that we demand careful planning and adequate preparation to ensure that we do not undermine or compromise the well-being of the people of Portmore and adjoining communities.

"We must learn from the past and I, as one of the incumbent MPs in Portmore, will do all that I can to ensure that mistakes of the past are not replicated in Portmore," declared Jackson.

The proposed new township on 4,677 acres of land at Bernard Lodge will include, among other things, 17,000 homes, agricultural facilities, including farms and processing plants, light-manufacturing industries, plus a range of social services.

The PNP now holds two of the three seats in Portmore, with the Jamaica Labour Party's Alando Terrelonge taking the St Catherine East Central seat in the 2016 general election. That was the first time the JLP was winning that seat in 28 years.

But Vaz argued that the Fagan seat has been trending marginally over several elections and will be up for grabs in the next general election. He also charged that Jackson will come under increasing pressure to hold his seat when Jamaicans return to the polls.